Upon occasion, my responsibilities these days have a way of dovetailing into what I used to do for a living. Today, it's happening again.

My professional career in the U.S. intelligence community was in counterintelligence (CI). This involved watching the other guys and making it difficult for them to penetrate either the intelligence organization itself or the broader apparatus of American government and private sector decision-making.

Don't Miss: Here's What Nobody Gets About the Media's "Oil Glut" Mantra

These days, the more visible counter operation involves the one against terrorism. Here, the objective is to track down, prevent, or limit those who are bent on attacking targets, usually civilian and increasingly "soft" (those having little protection), to undermine our society and our way of life.

I had little connection to counterterrorism throughout most of my professional life... until quite recently. Life has a strange way of coming about in circles.

To show you what I mean, let me first explain something else...

My 2015 Windsor Castle Briefing Was Too Optimistic 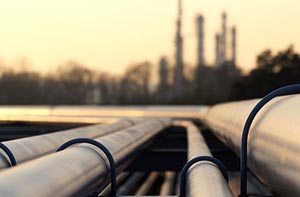 As many of you are aware, I provide briefings each March at Windsor Castle outside London. The occasion is the annual Windsor Energy Consultation held under a charter granted by Queen Elizabeth II.

The select assemblage brings together ambassadors, ministers, councilors, other officials, corporate executives, and investment fund gurus to hear the latest in energy from some of the top energy minds in the world. About two dozen of us provide analysis over three days, with four of us providing closed-door policy briefings to the ambassadors and other public figures.

That those latter presentations take place in the castle's dungeon is one of the best-known traditions of the Consultation.

I have been privileged to provide both the plenary and ambassadorial briefings for each of the past eight years.

The reason this comes up now (at the end of July) is because of a policy advisory I am currently working on. It turns out to be an update of a portion of the material I presented at Windsor in 2015 (you can see some of that material by clicking here and here).

Unfortunately, matters have become worse since then...

Global Energy Infrastructure Is in Dire Need of Repairs

It involves the state of the global energy infrastructure over the next 20-25 years. What I had labeled a crisis in March 2015 will become a ticking time bomb as we approach the next decade. Unless there are some major changes in global policy, within the next 10 years we are likely to reach a point of no return.

As with energy itself, energy infrastructure comprises three segments:

Therein lies the problem. Much of the current infrastructure is in dire need of replacement. And that is only to service the population now receiving energy.

It says nothing about how burgeoning populations in places like Asia and Africa will be attended to, or where improvements will come from in the vast areas that presently have only intermittent electricity, or suffer from continuous rationing of oil and natural gas.

My estimates given in 2015 are low compared to what is projected today.

Despite an expansion in long-term funding support (from governments, international agencies, sovereign wealth funds, and private investment), the overall energy infrastructure needs have increased to $53 trillion by 2035.

The base figure suggested by the Paris-based International Energy Agency (IEA) when I first made my estimates 17 months ago was $48 trillion: roughly $40 trillion for the infrastructure itself, the remainder to address improvements in energy efficiency.

That was without attention to environmental concerns. Including an attempt to reach the EU's so-called 2ºC Climate Change target would add at least $5 trillion to $7 trillion to the total.

All of the expenditure remained heavily weighted toward maintaining the present networks. In other words, less than 50% of all expenditures estimated have anything to do with attempting to meet rising demand, especially in those developing economies or newly emerging areas.

And some sectors are even more pronounced in my earlier projections...

Oil and Natural Gas Are Worse Off Than Other Sectors

For example, in, crude oil and natural gas, almost 80% of all infrastructure expenditures between now and 2035 are to meet expected declines in current production.

Not to provide for the added pressure of population rises in many parts of the world, mind you, just to meet current needs projected forward.

In 2015, I said that, "At current projections, the prognosis is looking at only a Band-Aid to patch over the existing network with piecemeal and non-integrated approaches tied to national/corporate debt limitations."

You see, the problem with infrastructure is twofold.

First, infrastructure is very expensive. Second, investments in infrastructure do not provide upfront profits. Bottom line enhancements come from secondary and tertiary results, from applications to production or process improvements.

Infrastructure may be essential to how things operate, but it has little directly to do with "building a better mousetrap."

And it's here that my work crossed into the concern with terrorism...

My 2015 Windsor Briefing Keeps Coming Back to Me

Of all the issues I addressed to the ambassadors assembling at Windsor in 2015, one had by far the greatest impact. I indicated that my projections pointed toward widening portions of the population of the "new developing world" would be cut off from energy.

"At my current projections, billions of additional people will be cut off from energy, literally existing in the dark," I noted in 2015. My next sentence has come back to me more often than any other part of my briefing: "These will be the most fertile soil for any radical world view that comes along."

In the minds of some policymakers, the connection between a lack of access to energy and recruitment for terrorism organizations is a direct one. Without access to energy there is no real chance at economic advancement.

We have already witnessed a direct line between poverty and terrorism. Energy (or the lack of access to it) may yet prove to be the most dramatic next stage in that process.

To the extent that the security strictures allow, I'll let you know how this policy advisory progresses.

Next Up: Why Brexit Is Hiking UK Power Prices - and the Worst Is Yet to Come

Thanks for this excellent analysis of current and future needs. Would you recommend purchasing stocks of any infrastructure companies?