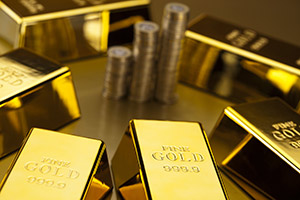 You see, gold prices are up 26% in 2016 and headed even higher. But this top gold stock is set for even bigger gains. In fact, Patalon says this gold stock could gain another 47%.

Before we get to Patalon's gold stock pick, here's why gold prices are climbing this year and will continue higher...

Editor's Note: Looking for the best gold exchange-traded funds to buy this year? Find all five of our picks in our new gold investing guide.

Right now, gold prices are flirting with a two-year high. At the same time, stock markets are logging record closes. Bonds are also rallying. You typically don't see the trio moving in tandem.

Yet the most interesting thing, Patalon says, is that investors trying to profit from gold have a better investment option than buying physical gold.

The biggest gains will be from gold-mining stocks. And one of them is the clear winner. It's up 79% since Patalon first recommended it, and he sees total gains of 130% by the end of the year...

Buy This Gold Stock Today Before It Climbs Again

Gold miners have been this year's star performers.

Yet there is one that stands out. It's Goldcorp Inc. (NYSE: GG).

Headquartered in Vancouver, Canada, Goldcorp engages in the acquisition, exploration, development, and operation of precious metal properties in Canada, the United States, Mexico, and Central and South America.

Over the last several years as it reigned in spending and cut costs, Goldcorp emerged as one of the mining sector's most efficient gold producers. According to a recent report, the company dropped its "all-in" mining costs to below $850 an ounce last year.

The company said it can achieve an even lower cost this year. Goldcorp projects it will produce 2.8 million to 3.1 million ounces this year at an "all-in sustaining cost" of $850 to $935 per ounce.

"Even at today's lower price of gold, that's close to $500 in pure cream," Patalon explains. "As gold prices move higher, Goldcorp's margins will expand - and its share price will surge."

Legendary investor Jim Grant, founder of Grant's Interest Rate Observes, is also bullish on gold. He owns the miners, including Goldcorp. He believes gold will earn back some long-overdue respect as a true store of value.

"Analysts have a high-water price target of $26.50 on Goldcorp, which is 47% up from current prices and nearly 130% above where shares were on Jan. 1," Patalon said.

The Election Fiasco Unravels: Voters who dislike both Donald Trump and Hillary Clinton are desperate for a third candidate. They might not know it, but they have one already...