In a move that's overshadowed by nonstop election coverage…

…Fed Chair Janet Yellen is scheduled to speak from Jackson Hole, Wyoming, this Friday in what could be one of the most important speeches of her career.

Here's what they know about what she's going to say.

And how you can profit.

George Soros and Paul Tudor Jones are two of the most legendary traders of all time.

Soros is best known for shorting the British pound sterling in 1992 and banking more than $1 billion in a trade that brought the Bank of England to its proverbial knees.

Jones is best known for having predicted Black Monday in 1987 and tripling his money, also in a single trading day.

Both men are worth billions today, having gone on to helm some of the biggest, most sophisticated trading operations the world has ever seen.

And both men have recently put on S&P 500 put positions representing record levels in their collective management history.

…ahead of Yellen's speech.

S&P 500 put options are, of course, a specialized bet that the S&P 500 will decline. They're used by traders who have very specific expectations with regard to how much the index will fall and by when.

Soros Fund Management, for example, has doubled the amount of puts it owns on the S&P 500 to 4 million, representing a notional value of $839 million against roughly $4.1 billion in assets, according to its most recent 13F, a quarterly report filed by institutional management in accordance with SEC regulations. 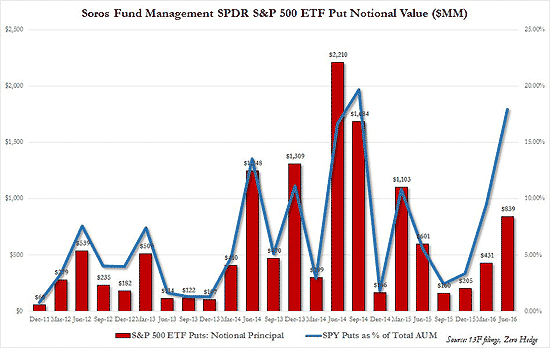 At the same time, Tudor Investment Corp. has more than doubled its S&P 500 puts to a notional value of $1.7 billion, representing 37% of its disclosed long equity exposure of more than $4.7 billion. 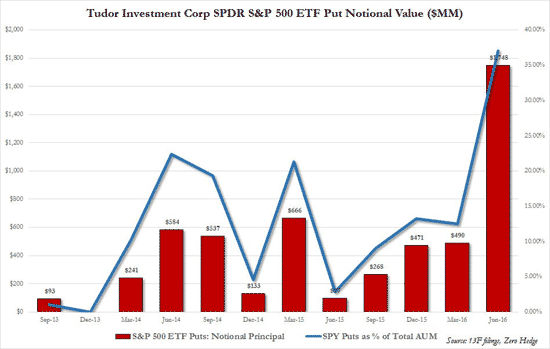 …again, they've put these positions on ahead of Yellen's speech.

Which begs the question… why?

There are three possible explanations.

First, both men clearly believe that the markets are going to be volatile, so they want holdings like the S&P 500 puts to hedge their upside, much as we do at Total Wealth.

Second, they also know that the markets have an upward bias and that growth is ultimately rewarded with higher prices. So they're keen to protect that potential.

And, third, both men are looking for absolute profits when Yellen finally steps in it and everybody realizes that she's lost control.

The key takeaway here is that they've set up for a drop.

She and her team at the Fed lost control a long time ago, which means that traders working with real money instead of fancy, out of date, academic models and flawed data are the more relevant input when she steps up to the microphone Friday morning.

They're going to be looking for hawkish changes to her language, just as I am because that's all she's got left… her language.

Don't Miss: The Secret to the Secret (of Big Profits)

Yellen has finally realized that what she says carries enormous weight and that any slip up in interpretation risks cratering the world's financial system.

So she's going to jawbone the ongoing rate hike speculation to death and try to convey a tough, "in-charge" posture while also relating that she'll stay the course until we get a better handle on the data.

The way I see it, there would be no point hiking rates in a world where virtually every other central bank is experiencing deflationary inputs and lowering them.

So what I think she's going to do is kick the can down the road, saying something like "we don't know enough – about the data – yet to make a conclusion."

At the same time, I also see her being just arrogant enough and desperate enough to try a rate hike in September despite the chaos it will cause.

Because she knows that raising rates now gives her the room to lower them again next year when all the cockamamie stuff the Fed's done to date really comes home to roost.

And I think that's what Soros and Jones are betting on, both literally and figuratively.

Now, normally playing along with billionaire bets is a bad idea, not to mention impossible because the average investor has neither the sophistication nor the capital to do so.

But in this case, you're in luck.

There are a number of easy to implement ways you can "take the trade" and potentially rack up some legendary profits of your own.

More sophisticated investors may want to buy put options on the S&P 500 itself or even sell calls against the index. You could also consider buying VIX calls to play volatility, because that will rise as the S&P 500 falls. I generally favor either "at the money" or just "inside the money" in situations like this, but that's just me. Your risk tolerance and expectations are obviously different, so take that into consideration when thinking about a trade like this one, especially with options.

No matter what route you choose, though, I want you to keep two things in mind.

First, Soros and Jones are both known for being technically proficient traders. That means they've got a firm handle on risk management, even though I believe they're both motivated by profits in this instance. They'll be gone faster than a New York cabbie if Yellen somehow keeps a lid on things Friday and traders make a move higher.

And, second, neither man has "bet the farm" here. Instead, they're both using exceptionally large S&P 500 put options as part of a disciplined investment strategy, exactly as you should.

In closing, this kind of stuff can be scary to the uninitiated… I get it.

But that's not you.

You're here and a part of the Total Wealth family, which means you've got a tremendous advantage over other investors who are flying by the seat of their pants.

Coming into Yellen's speech, I think it's very important that you remember every significant crisis over the past 2,000 years has led to significant profit-creating opportunities.

You've just got to be savvy enough to hunt them down, flexible enough to take them when the days are darkest and the potential returns highest, and disciplined enough to make your move.

I'll be with you every step of the way.

Editor's Note: When it comes to market turmoil – central bank meddling, European crises, you name it – many investors panic and run when they could be setting themselves up for profits. That's why Keith maintains a laser-sharp focus on the Six "Unstoppable Trends" – since they lead to opportunity in any market environment, no matter what happens in Washington or on Wall Street. In fact, he's already got his eye on another opportunity. Get access to Keith's full report, and the full Total Wealth strategy, by signing up here. It's completely free!