Stock market crash warning signs continue to mount. That's why today (Friday), we're bringing readers the best investments to make during a stock market crash to both protect your portfolio and profit from a downturn.

The Dow Jones Industrial Average, S&P 500, and Nasdaq all opened sharply lower today as interest rate jitters reentered the markets. Shortly after today's opening bell, the three key benchmarks were down 0.78%, 0.85%, and 0.76%, respectively. 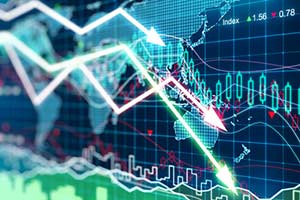 Stocks fell after Boston Fed President Eric Rosengren, who is an FOMC voter, said in a speech Friday morning that a reasonable argument could be made for normalizing the Fed's monetary policy based on recent data.

Inflation still hasn't hit the Federal Reserve's desired 2% target, but Rosengren suggested the strong labor market could drive consumer prices higher. He said there is evidence of upward pressure on wages and salaries. That could lead to inflation hitting the Fed's target.

Rosengren didn't specifically say the normalization should begin in September. But he didn't dismiss the idea, either. Worries are increasing that the Fed faces serious risks if it waits much longer to raise rates. The next FOMC meeting is Sept. 20 and Sept. 21. The Fed last raised interest rates in December 2015 to 0.25% to 0.5%.

Trending Now: This penny stock could bring triple-digit gains - and save a dying industry at the same time. Click here to learn more...

Market odds of a rate hike after Rosengren's speech jumped from 18% to 27%, according to the CME Group's FedWatch Tool.

And the Fed isn't the only reason some investors are bracing for a 2016 stock market crash...

North Korea just conducted its fifth and biggest nuclear test on Friday. North Korea said it has mastered the ability to mount a warhead on a ballistic missile. Officials also claimed it tested the warhead as protection against "threats and sanctions" from hostile elements.

The timing raised eyebrows. You see, it comes on the heels of U.S. President Barack Obama's trip to Asia last week to attend a G20 meeting, followed by a tour of other Asian nations.

Today's stock market drop is a stark change from what we've been seeing. For the last two months, U.S. stocks have traded in a narrow range on low volume. The S&P 500 hadn't logged a move -- up or down -- of more than 1% on a closing basis since July 8.

And the concerns in the market today only add to the stock market crash warning signs we've been sharing with investors all year, including:

According to Lewitt, it is mathematically impossible for negative interest rates to generate positive economic growth. He maintains that negative rates are nothing more than a means of destroying capital.

Related Content: This Biotech Stock Is Set to Soar 115%

But the fact that there are so many warning signs doesn't mean you should take your money out of the markets. In fact, Money Morning experts have just shared the best investments to make before a stock market crash and when the market is falling.

These investments will protect your hard-earned money and even help you profit during a stock market crash...

As a reverse exchange-traded fund (ETF), SH is designed to profit from a decline in the daily performance of the broad-based S&P 500.

An investment in SH right before the 2008 stock market crash returned gains of more than 40% from September 2008 to January 2009. During this year's Fed-incited sell-off between January and mid-February, the ETF jumped roughly 15%.

This ETF isn't meant to be held for a long stretch, as its long-term gains aren't impressive. But data shows that holding it for just a few months (in 2008, for example) can bring huge gains.

It's also important to point out that this ETF should only represent a small portion of any portfolio. Market timing isn't easy. But when you are on the right side, gains can be substantial. SH rose 1% to $38.35 intraday Friday as stocks swooned.

And if you're looking to protect your portfolio, Lewitt recommends bulking up on cash ahead of a stock market crash. But that doesn't mean you should just be socking away money - he has a better method.

His suggested portfolio consists of 10% to 20% cash. An equal amount is allotted to gold. And if you can't get your hands on physical gold, he recommends gold ETFs.

One of best gold ETFs to buy now is the SPDR Gold Trust (NYSE Arca: GLD). It offers an innovative, cost-efficient, and secure way to participate in the gold market.

GLD trades just like a stock. That means investors can buy and sell gold via the trading of a stock that's on a regulated stock exchange. The value of GLD is directly correlated to the value of the gold held by the ETF (less expenses), as well as fluctuations in the price of gold.

If you want to invest directly in gold mining companies, you can turn to gold stocks now, too.

If we see a stock market crash, gold prices and gold stocks should soar as investors head into safe-haven investments.