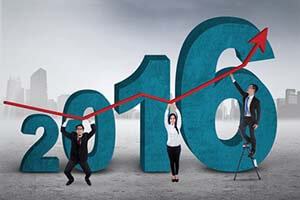 The Dow Jones Industrial Average pushed higher on Tuesday as investors continue taking a "wait-and-see" approach to the Federal Reserve's policy announcement tomorrow. The Fed Open Market Committee (FOMC) has largely held the markets hostage over the last 12 months with continued speculation over the timing of the next rate hike.

The meeting comes at a tough time for the Federal Reserve. On Wednesday, the Atlanta Federal Reserve Bank downgraded the U.S. third-quarter GDP estimate to 2.9%.

The Dow Jones gained 49 points, fueled by a rally in healthcare stocks and optimism that the Fed will hold off on its next interest rate hike until later this year. In addition to a big acquisition of a liver disease treatment by Allergan Plc. (NYSE: AGN), healthcare stocks received a big boost from Gilead Sciences Inc. (Nasdaq: GILD), which has a number of similar drugs in its pipeline.

It was a busy day for housing stocks. This morning, investors weighed the August report on housing starts and building permits. In August, housing starts slumped more than economists expected thanks to flooding in the Southern part of the nation. The weak report is more bad news for the Federal Reserve as the central bank prepares to discuss monetary policy. Meanwhile, shares of Lennar Corp. (NYSE: LEN) fell 4.7% even though the firm topped Wall Street earnings expectations.

Of course, the big news today comes from the Federal Reserve and the Bank of Japan.

Trending: Why a "Promise" Is the Single Most Valuable Investment on Wall Street

Both central banks will be offering their latest updates on monetary policy this Wednesday. Markets are expecting that the Bank of Japan is poised to slash its interest rate into further negative territory as leaders desperately attempt to spur growth in the world's third-largest economy. Negative interest rates are killing savers all around the world. And if you want to protect yourself from the damage, be sure to read the latest from Money Morning Chief Investment Strategist Keith Fitz-Gerald, right here.

Some have argued that the Federal Reserve isn't ever going to press into negative interest rates. But the chatter today is that the U.S. central bank is about to slash its forecast again on how high rates must go to bolster output, inflation, and productivity.

Oil prices were on the move as investors continue to speculate on whether OPEC and other non-OPEC producers would engage in a production freeze. U.S. oil prices were also reacting to news that Colonial Pipeline announced plans to restart transporting more than 1.3 million barrels per day after it shut town transport to address its largest leak in two decades.