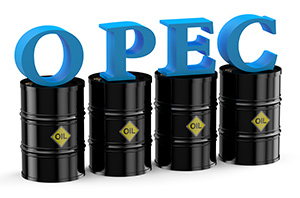 s reached a deal to limit its production levels in November in order to support global prices. The triple-digit rally came despite a roster of lackluster earnings reports earlier in the trading session.

On the earnings front, shares of mattress giant Tempur Sealy International (NYSE: TPX) plunged 24% after the firm reported weak annual sales. Meanwhile, shares of Nike Inc. (NYSE: NKE) fell more than 3.5% after reporting earnings after the bell on Tuesday. The company beat expected earnings and revenue forecasts, but reported a weak outlook for future orders. That report fueled a drop in price targets by several brokerages.

The Dow Jones rallied more than 110 points on Wednesday after Federal Reserve Chair Janet Yellen announced the central bank had no scheduled time frame for the next interest rate hike. But the bigger news is that OPEC is reported to have reached a deal to cap production in order to support crude oil prices.

Federal Reserve Chair Janet Yellen will speak again after the bell on Wednesday. Investors are looking for more clues on the timing of the next interest rate hike by the U.S. central bank. Today, five other leaders at the Fed took turns speaking on monetary policy and other pressing issues tied to the global economy. According to the CME Group's FedWatch tool, the probability of a rate hike in December now sits at roughly 57%.

The price of crude oil today rallied after U.S. crude inventories experienced a larger drawdown last week than analysts had expected. The U.S. Energy Information Administration announced a 1.9 million barrel decline through the week ending Sept. 23. However, the EIA did report a higher than expected build in gasoline inventories.

But the big news today was the global confusion over German financial firm Deutsche Bank AG (USA) (NYSE: DB). Mixed reports out of Germany indicate that the nation's government is considering a plan to provide a bailout to the embattled bank should it fail to have enough capital to pay off a $14 billion settlement to the U.S. Department of Justice. Despite that initial report, shares reached a 33-year low this week, and the bank issued a memo ensuring employees that the firm would remain solvent. DB CEO John Cryan also told a German newspaper that "state aid" would not be an issue for the megabank.

Money Morning Global Credit Strategist Michael Lewitt has earned readers more than 166% on this company's massive decline this year. Here's Lewitt's latest on where DB stock will fall to next.