With Donald Trump's win in the 2016 presidential election, Republicans now control the White House, Senate, and House of Representatives.

That removes a lot of the uncertainty investors have been fearing. While that may sound bearish for silver prices in 2017 at first, I still see double-digit gains for the precious metal next year.

In fact, if you look at how silver prices performed in the lead up to the election results and following them, you'll understand what I mean. 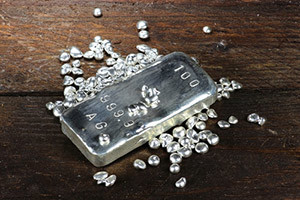 In my view, a Trump presidency combined with Republican control of the other two branches will be good for the price of silver.

Inflation is likely to take deeper root and accelerate further. Infrastructure buildout to the tune of $500 billion, along with a weaker dollar, should help underpin higher inflation.

There's also the prospect of rising industrial demand for silver. Roughly 70% of consumed silver ends up in industrial applications and renewable energy products like solar panels.

If Trump can push through some of his promised policies like corporate tax cuts, it would go a long way to stimulate manufacturing. And that would boost the need for silver in electronics and other high-added-value products.

Here's how high I see silver prices in 2017 climbing…

Our New Price Target for Silver Prices in 2017

Much like gold prices, silver prices spiked as news emerged that Trump would likely win the Electoral College vote. But as it became clearer that Republicans would control both the House and Senate, the markets breathed a sigh of relief because it removed uncertainty. It also decreased the risk of political logjams.

Silver prices backed off the day following the election, giving up most of their gains in the previous 24 hours. But on Thursday, two days after the election, the price of silver rose despite gold falling.

We welcome your thoughts on where silver is headed. That's music to our ears! Aloha from Molokai Hawaii