President-elect Donald Trump announced on Thursday that Sen. Jeff Sessions (R-AL) will be the next U.S. Attorney General - which triggers some questions on what that means for one of the country's fastest-growing industries.... 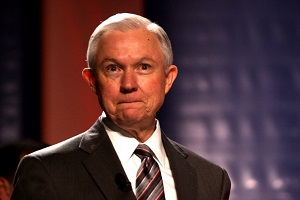 Sessions is arguably best known for his conservative views on immigration and civil rights. He was a leading opponent of President Obama's executive amnesty order in 2007, which gave jobs and benefits to undocumented immigrants. He also defends "traditional Alabama values," which conflict with same-sex marriage laws in America, according to his official website.

The Alabama senator has also been an outspoken critic on the nation's burgeoning marijuana industry.

In fact, Sessions is firmly against legalizing pot for recreational or for medicinal use.

"We need grown-ups in charge in Washington to say marijuana is not that kind of thing that ought to be legalized," Sessions claimed in a Senate meeting on April 5.

In the same Senate meeting, Sessions claimed, "This drug is dangerous, you cannot play with it, it is not funny, it's not something to laugh about . . . and [it's important] to send that message with clarity that good people don't smoke marijuana."

At a time when the marijuana industry is just starting to secure a legitimate foothold in the U.S. economy, could Jeff Sessions end legal marijuana?

If that's the senator's ultimate goal, it might be easier said than done, because of actions set forth by the Obama administration...

In 2013, the Justice Department released a memorandum, dubbed the "Cole Memo," that outlined what circumstances would call for federal law enforcement to intervene on the marijuana issues of individual states. Basically, so long as the states are effectively able to regulate and enforce their marijuana policies, there would be need for intervention.

Congress has also prohibited the Justice Department from using federal funds to interfere with medical marijuana patients if the drug has been approved in their state.

Sessions believes that President Barack Obama's administration has allowed the issue of legal marijuana to be "minimized." On April 5, he stated "I think the DEA understands this, but I'm not sure that the President does," when discussing the dangers he believes marijuana presents.

In order to curb the president's allegedly lax stance on marijuana, Sessions appealed for the federal government to step in. Uncle Sam, apparently, can reverse what Sessions believes to be "the dangerous impacts of marijuana legalization," as he called it on April 5 at the Senate hearing.

Specifically, the Alabama senator suggested that federal prosecutors start prosecuting cases of marijuana use in Colorado.

But his request immediately fell flat...

That's because the Obama administration said "no, don't do that" and asked the feds to stay out of the states' business by issuing the Cole Memo.

Now that a new administration will be entering the White House in January, the Cole Memo could be scrapped completely and Sessions could have his way.

But that seems unlikely, given President-elect Donald Trump's stance on marijuana...

decriminalize the drug, make it less dangerous for possession. this would slow down dealers from collecting up large amounts for weed, thus profits and sales will plummet all the way to the catels

REMEMBER YOU CARRY A PROUD NAME, I WAS A SESSIONS UNTIL I MARRIED. I KNOW YOU WILL DO THE RIGHT THING, REMEMBER TO CARRY OUR SESSIONS NAME PURE.
GOD BLESS SENATOR
BOBBIE