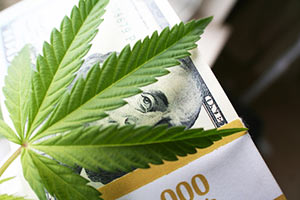 Legal marijuana sales are already projected to reach $3.9 billion in 2017, and we have even better news for investors about marijuana stocks in 2017.

"You see, marijuana advocates aren't finished with their fight. In fact, they're stepping up the pressure," Robinson said on Dec. 6. "They're now eyeing the opportunities that could arise in 2017 – and beyond."

Even with those growth numbers, investors should be aware that investing in marijuana is still speculative. Many marijuana stocks are penny stocks because they don't meet the qualifications to trade on major indices. And penny stocks can be notoriously risky.

Also, investors are still waiting to see what will happen to medical and recreational marijuana policies under President-elect Donald Trump.

It's true investors should be cautious when investing in cannabis companies. But there's no denying marijuana is growing into a massive industry that will generate billions of dollars.

And investors who are forward-looking could make long-term gains.

You see, if two of these next states legalize medical marijuana, 60% of the country would have some type of legalized marijuana policy. Other states can look to places that have successfully implemented pro-marijuana legislation to start drafting their own policies.

And when they see how much money is being made, they will want to follow suit…

For example, Colorado collected more than $135 million in marijuana taxes and fees in 2015. The state used the money mostly for school construction projects. 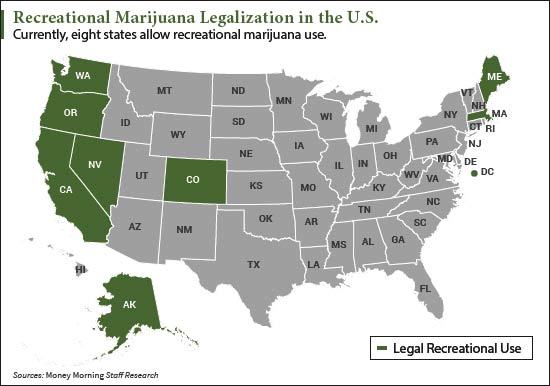 These three states potentially legalizing marijuana next year provides more legitimacy to the industry and more profits for companies.

Marijuana Stocks in 2017 Could Skyrocket If These 3 States Legalize

All Cannibas strains should BE LEGAL IN ALL STATES FOR ANY PURPOSE!!!!!

Advocates of legalizing this item are ignoring one fact. The majority of people hooked on hard drugs started out using this (so called ) harmless marijuana . This legalization will be a huge social disaster within the next decade.

Bill , You are unfortunately ignorant of the facts.
The majority of users of hard drugs began with alcohol which affects the judgment .
I have seen a majority of hard drug users become addicted through Dr-shopping . The facts are 26k people die every year due to prescription drugs and another 250k due to alcohol related deaths !
Would you like to go into the Tobacco numbers ? Your ignorance and the governments lie is being revealed slowly through newly allowed clinical trials previously not funded. In addition the schedule 1 designation is a farce. Listing Cannabis as more dangerous than Meth and OxyContin ! No single death or overdose has ever been recorded and you can't say that about Caffiene or aspirin !
A gateway off of pills is more accurate. The irony of all this schedule one is that by law there can be no medicinal value.
In 2002, the government listed medicinal benefits when it obtained a patent for cannabanoids as anti oxidants and Nerve protectants Government patent #6630507