Last Friday (Jan. 6), the S&P 500 and Nasdaq both reached all-time highs. The Dow nearly broke 20,000 points for the first time. But record highs aren't always a good sign. Surging stock markets have led to bubbles in the past.

Before we get to our protection plan, let's look at how past stock market crashes happened and why we might be seeing another one in 2017...

The stock market crash of 1929 led to an 86% drop in the Dow. By 1932, about half of all U.S. banks had failed, and 30% of the U.S. workforce was unemployed. It took over two decades for the market and the country to recover.

The crash surprised everyone. It was preceded by a massive level of growth. Starting in 1923, the Dow soared by 329% before the crash in 1929.

But, the growth was the result of speculative investing instead of economic gains. As stocks continued to grow, more and more investors gambled their money that it would only continue to rise. People even borrowed money to speculate on stocks.

During the 1920s, amateur stock players borrowed $8.5 million to buy stocks. And the more money these people put into the market, the higher it would go. This is exactly why a stock market bubble is so dangerous.

Investors can ride out the ups and downs of the market. But speculators can't afford to lose. Once stocks began to fall, speculators sold stocks as fast as they could. This mass sell-off caused prices to plummet. Some stocks couldn't find a buyer at any price.

Trending Now: How to Make a Killing... When Everyone Else Is Panicking

Similarly, the stock market crash of 2008 was nearly as destructive.

The 2008 stock market crash fell by 54% between October 2007 and March 2009. More than $2 trillion in retirement savings were lost as the market fell.

And a speculative bubble was responsible this time too.

Home prices doubled between 1996 and 2006. Everyone from Wall Street banks to average homeowners wanted a part in the gains.

From 2004 to 2006, the percentage of mortgage loans at subprime rates more than doubled to 20%. Subprime loans allowed home buyers to purchase houses even if they couldn't qualify for a traditional mortgage or wanted a house out of their price range.

Subprime loans worked as long as housing prices continued to rise. Borrowers could refinance after their house had gone up in value and then be able to afford a traditional mortgage.

But when housing prices didn't go up, homeowners were forced to sell. And as more houses sold, the lower prices went.

We are now seeing some of the same stock market crash warning signs...

Why a Stock Market Crash in 2017 Is Possible

The Dow has been on a record-smashing run since 2009, but speculation has helped fuel its rise.

But, the explosive growth since 2009 is partly due to low interest rates from the Fed.

The chart below shows just how dramatically interest rates were slashed after the financial crisis in 2008. 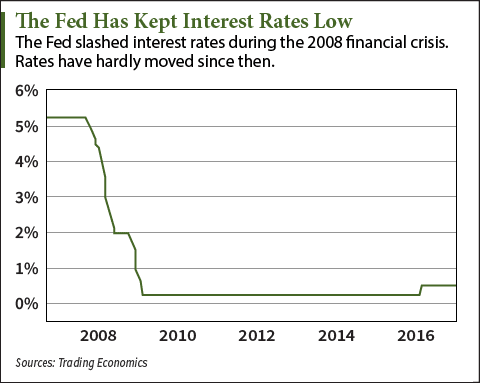 The Fed reasoned that if corporations could borrow more cheaply, they'd be more likely to spend money on growth and development. And if corporations spent more money, the economy would grow as a result.

Instead, corporations have taken advantage of cheap borrowing costs to buy back shares of their own stock. Reuters reports corporate share purchases in 2015 alone hit $520 billion. From 2008 to 2015, that number is $2.24 trillion. This has driven up stock prices, but it can't last when interest rates go up.

This is similar to the bubbles that led to the historic stock market crashes discussed above.

However, low interest rates are ending, and a stock market crash in 2017 is now a real possibility.

On Dec. 14, the Federal Open Market Committee (FOMC) hiked rates by 0.25%. This was only the second rate hike since 2008, but the Fed also signaled it will be raising rates at least three more times in 2017.

As interest rates go back up, bonds become more attractive, and corporations are less likely to finance share buybacks with cheap debt.

Where to Put Money Before a Stock Market Crash in 2017