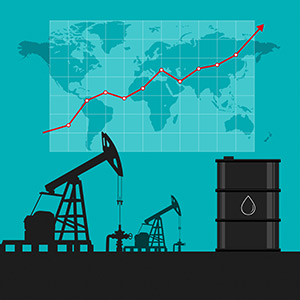 One of the main reasons oil prices jumped in 2016 was the OPEC agreement reached on Nov. 30. That deal went into effect on Jan. 1. And as long as the OPEC deal stays in place, oil prices could be heading even higher. That's why oil stocks will continue to be a strong play in the new year.
Even though 2016 is over, our list can help you see which oil stocks benefited from higher oil prices.

In 2016, PetroChina sold off nearly 50% of its stake in China Reform Holdings, a gas pipeline operator between China and central Asia. This sell-off is part of a larger strategy by PetroChina to monetize its gas pipelines and reinvest the money elsewhere.

The CVX share price gained 43% in 2016 as oil prices rebounded. Chevron gained 7% alone between the Nov. 30 OPEC agreement and the end of the year.

Chevron's impressive 43% gain in 2016 isn't the best on our oil stocks list, but CVX pays an annual dividend yield of 3.7%, which provides additional income to its shareholders.

Canada-based Encana Corp. (NYSE: ECA) was the eighth top oil company stock in 2016, with a 131% gain over the year. ECA and its subsidiaries focus on developing, exploring, producing, and marketing natural gas, liquefied natural gas, and oil in North America.

The Globe and Mail reports the company switched its focus from natural gas to oil around 2013. The company struggled as oil prices fell 60% between July 2014 and January 2016.

But with oil prices on the rise again, Encana is reinvigorated. On Jan. 4, Encana announced it had already reached its 2017 operating capacity.

Petroleo Brasileira SA Petrobras (NYSE ADR: PBR) is Brazil's largest oil company and it's our seventh best oil stock of 2016. Petrobras is an oil and natural gas exploration and production firm. It is also an operator of oil tankers, pipelines, and terminals in South America and globally.

Former Brazilian President Dilma Rousseff was previously on the board of directors for Petrobras. Rousseff was impeached as part of a corruption scandal involving the government and Petrobras. But the scandal hasn't weakened PBR's stock performance.

Enerplus Corp. (NYSE: ERF) is a $2.1 billion oil company based in Calgary and trades on both the NYSE and Toronto Stock Exchange. ERF primarily produces crude oil in the Bakken fields in North Dakota and Western Canada.

Glencore Plc. (LON: GLEN) is a Swiss commodities company trading on the London Stock Exchange. Glencore is the world's biggest commodity trader, according to Bloomberg. In addition to oil, Glencore trades in other natural resources, namely metals and minerals. GLEN operates globally and has a current market cap of $42.97 billion.