The Saudi Aramco IPO will be the biggest initial public offering of all time, but the IPO process will be incredibly burdensome for a uniquely huge company. And we've identified three major obstacles standing in the way of this oil giant going public…

Today, we're going to break that process down for our readers so they'll be prepared to purchase Aramco shares when they hit the market. 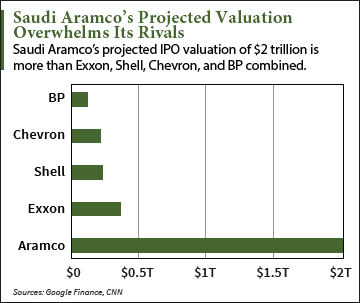 But the Saudi government is preparing to sell the company and list it on public stock exchanges. And with an estimated market cap of $2 trillion – nearly six times the size of Exxon Mobil Corp. (NYSE: XOM) – even selling 5% of its shares will make it the biggest IPO ever.

In fact, if the Saudi government sells 5% of its shares to the public, its projected $100 billion value will be four times the size of the Alibaba Group Holding Ltd. (NYSE: BABA) IPO, which is currently the largest IPO ever.

Unfortunately, the Saudi Aramco IPO date hasn't been decided yet, and it keeps getting pushed back even farther. That's because a slew of complex obstacles stand in the way of the oil giant's public debut.

To help potential investors make sense of the delays, we'll bring you up to speed on the IPO and show you why these obstacles are a cause for concern…

Why Saudi Aramco Is Going Public

Saudi Arabia confirmed it was considering selling shares of Aramco in January 2016, right as oil prices were approaching their 10-year low. And that's very important for understanding Saudi Arabia's motivations…

An oil price collapse of that magnitude pulls the rug out from an oil-based economy like Saudi Arabia's. Because the Saudi government gets 87% of its revenue from petroleum, when the price of oil falls, the government brings in much less money.

That's the context investors need to consider when they think about Saudi Arabia's decision to hold an IPO for Aramco.

The Saudi government needed money as oil prices crashed, so it decided to sell a chunk of its giant oil company to fill the gap.

That's why investors need to consider whether the Aramco IPO is letting them buy into a lucrative oil company or just helping Saudi Arabia fill its budget gap.

And the oil price crash caused Saudi Arabia to act quickly with the Aramco IPO. By only selling a 5% stake, the government would retain majority control over Aramco, but it's now running into a series of unforeseen problems. Here are the three biggest challenges facing Saudi Aramco, including whether the IPO will happen at all…

The first challenge is the tremendous size of the Saudi Aramco IPO.

Saudi Arabia intends to offer a 5% stake in the entire company, not just the oil business. That makes the public offering even more complex because the government can't simply compartmentalize the portion it wants to sell.

And that has global investment banks salivating over the potential fees they can charge to help the company unwind its connections to the Saudi government.

According to The Wall Street Journal, fees associated with the Aramco IPO could pile up to $1 billion in what it called a "bonanza of fees."

That's why banks like JPMorgan Chase & Co. (NYSE: JPM) and Morgan Stanley (NYSE: MS) have worked hard to get the underwriting contracts for the IPO, including flying representatives to Riyadh multiple times.

In addition, Saudi Arabia is thought to have plans for significant investments going forward. That means banks are eyeballing futures contracts and fees down the road, too.

But Aramco has two even bigger problems…