For over four years now, Money Morning Executive Editor William Patalon, III, has been keeping investors "in the know" about escalating tensions in the South China Sea. Always quick to research profit opportunities linked to the conflict, Patalon routinely reports back to his readers news of the latest defense and tech plays involved.

But now we've learned of another threat that's fomenting about 1,200 miles to the northeast in the East China Sea.

The impending battle over this region could result in a World War III... 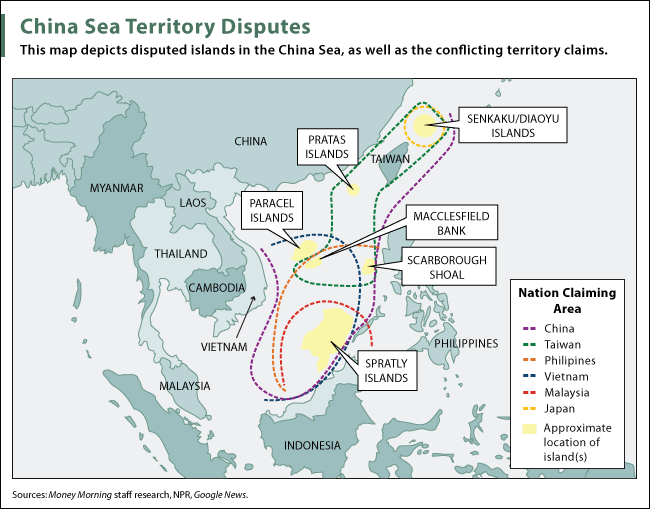 Just south of Okinawa, Japan, sits an archipelago of eight uninhabited land masses - the Senkaku Islands to the Japanese, or the Diaoyu Islands to the Chinese. Since these islands sit north of Taiwan, they are considered a part of the East China Sea region (though, sometimes, the archipelago is mentioned in the South China Sea dispute, because it belongs to the overall South Pacific region to which China has made various territorial claims).

On Feb. 3, Japanese Prime Minister Shinzo Abe announced Japan would begin building military settlements on these islands, as they are the rightful property of his country.

China immediately disagreed. It claimed the islands belong to Beijing -- and have ever since the end of WWII.

Then the United States weighed in:

"I made clear that our longstanding policy [in support of Japan' s claim to] the Senkaku Islands stands," U.S. Defense Secretary James Mattis announced in a Feb. 4 press conference with Japanese Defense Minister Tomomi Inada.

In a flash, China issued an ominous warning to Washington over Mattis' words...