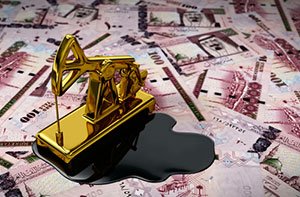 Saudi Aramco is reportedly worth over $2 trillion, twice the market cap of Apple Inc. (Nasdaq: AAPL). Aramco controls 20% of the world's proven oil reserves, or 267 billion barrels of oil, and that has investors eager to buy Saudi Aramco stock.

They'll get their chance soon.

The world's biggest oil company is planning an initial public offering soon, and it's going to break records. But investors need to approach the Aramco IPO with caution. The big numbers gloss over some serious issues with the company...

The Saudi Aramco IPO is projected to be the largest IPO of all time. The company is expected to offer 5% of the company for public sale, and with a total valuation of $2 trillion, the IPO will be worth a record-smashing $100 billion. That's four times bigger than the current record holder, Alibaba Group Holding Ltd. (NYSE: BABA), which debuted at a whopping $25 billion.

But, at one point, a Saudi Aramco stock offering was supposed to happen already. The Saudi Arabian IPO date has been pushed back by more than a year since it was first announced in January 2016.

That's because the Aramco IPO is much more complicated than a typical IPO, and it means potential investors need to pay careful attention to what's going on...

When Can I Buy Saudi Aramco Stock?

The Saudi Aramco IPO is expected to be the biggest of all time, but its massive size is also making the IPO process difficult. It also means there's no concrete date for the IPO.

The company has had to hire firms to manage the IPO, from advisors to underwriters. This is a standard part of a company going public, but the size of Aramco has made the competition fierce. The Aramco IPO could produce over $1 billion in fees for participating banks. Plus, winning a spot in the IPO process could mean future business with the oil giant.

"Every bank in the world is going to want to have a role in this," reported the Financial Times in January.

You Can Get Near-Instant Cash with This Fast Money Move: America's No. 1 Pattern Trader is revealing an easy-to-follow blueprint for achieving financial freedom. With his help, you could be $15,000 richer. Click here to get started.

That's why it was a shock when Aramco chose a small boutique investment bank to advise on the IPO. Moelis & Co. (NYSE: MC) beat out investment banks like Goldman Sachs Group Inc. (NYSE: GS) to sign the coveted agreement.

But Aramco went with a more expected approach when it chose its underwriters.

Saudi Aramco chose JPMorgan, Morgan Stanley, and HSBC to underwrite its IPO. That means these Wall Street titans will be promoting the stock and committing to buy shares of it if the public doesn't.

But the next step in the process for Aramco will be deciding which stock exchange to list the company on, and that's a much bigger hurdle to leap.

Aramco will list some shares on the Saudi Arabian stock exchange, but it's also looking to list shares on a major stock exchange with global reach. The company has short-listed exchanges in New York, London, or Hong Kong. But major exchanges like these have public reporting requirements that could open the company up to the public in a way it has never done.

If the Saudi Aramco IPO occurred on a stock exchange in the United States, the firm would need to follow U.S. fiduciary laws regarding transparency and public auditing. It would also have to form a board of directors that could take some power away from the Saudi royal family.

Money Morning Global Energy Strategist Dr. Kent Moors notes that Saudi Arabia was never keen to sell Saudi Aramco because it could mean having to reveal information about the oil fields it would rather keep to itself.

It also means the company will have to disentangle itself from the government. Just last week the Saudi government took a step toward that by announcing it was slashing the tax rate on Aramco from 85% to 50%. That makes Aramco stock more attractive to investors, but shows how deeply reliant the government was on the oil company. The government is expected to make up the difference through dividend payments once the company goes public.

But the biggest hurdle to the IPO might be convincing investors it's a good stock to own in the first place...

Saudi Aramco Stock Might Be Riskier Than You Think