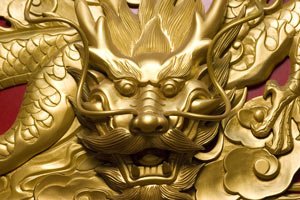 At last, China has sided with South Korea and the United States - and it's possible U.S. President Donald Trump had something to do with it...

This news was confirmed by the top nuclear envoys from North Korea's neighbors - Kim Hong-kyun of Seoul and Wu Dawei from Beijing, according to VOA News today.

They reported from a joint press conference in South Korea this morning that it is indeed time to take "strong action" against Pyongyang.

Beijing's compliance - the terms of which weren't specified by Kim and Wu - comes just after another threat was made by Kim Jong-un's kingdom...

On Monday, the U.S.S. Carl Vinson arrived in Pacific waters just off North Korea's coast. Pyongyang noticed. A North Korean Foreign Ministry spokesman then told the state-run Korean Central News Agency that Pyongyang will hold "the U.S. wholly accountable for the catastrophic consequences to be entailed by its outrageous actions."

The threat of such "catastrophic consequences" was not taken lightly, especially not from U.S. President Donald Trump...

China May Have Agreed to Help U.S. in Response to the POTUS' Tweets

What spawned these headlines came from two tweets posted by the POTUS around 8 a.m. today... 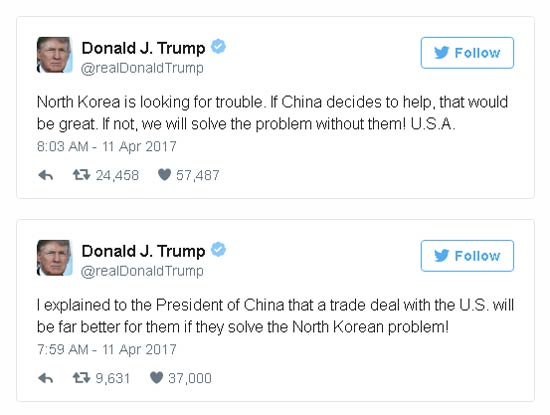 Whether or not Trump's "quid pro quo" did the trick is anyone's guess, but the mainstream media seems to think so.

It's no small endeavor, nonetheless - getting China to comply with actions against North Korea.

That's because Beijing has a deep interest in preserving a North Korean state as a buffer against Western influences. A united Western-leaning democratic Korea threatens communist China.

Plus, if North Korea falls one day, the United States could station itself there - right next door to its biggest trade nemesis on the planet.

I think China would rather have North Korea in its backyard than the US! They are not that stupid.