Investors are right to look for the best renewable energy stocks in 2017. Renewable energy investing is primed for explosive growth as the costs of clean energy fall and fossil fuel sources dry up.

Today, we've put together a list of the best-performing renewable energy stocks so far this year (with a market cap of at least $100 million):

While some of these are off to a hot start, we aren't recommending this list of renewable energy stocks. That's because many of these clean energy stocks are speculative bets or are overhyped (and overpriced).

Instead, we're interested in the next big winner, one that can make you money. And we have one renewable energy stock that could bring you double-digit gains in 2017 alone.

Investing in Renewable Energy Will Be Hugely Profitable in 2017

The demand for energy is rising, and the costs of renewable energy are falling. That makes this a great time to invest in alternative energy, as the sector is set to take off.

The EIA forecasts global demand for energy will rise 25% by 2040. That means more energy than ever will be needed to fulfill this global need.

But traditional sources of energy like coal, gas, and oil will be too costly to meet these needs.

The IEA predicts prices of these resources will rise as supplies dwindle and producers have to turn to more difficult, and costly, reservoirs. That's why the EIA expects renewable energy sources to become the leading supplier of electrical power in the United States if fossil fuel prices rise. 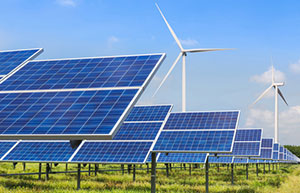 Renewable sources are not only needed to meet the growing demand for energy, they also have several advantages over traditional sources that could make them even more dominant than fossil fuels.

Not only is renewable energy better for the environment, which means society is willing to subsidize these sources, but clean energy is also harnessing unlimited, free energy. It's only a matter of reducing the costs of the technology needed to harness this power.

And those costs are dropping fast...

As renewable energy sources like solar and wind energy become cost-competitive with natural gas, they will be able to dominate the entire energy market.

While this surge in clean energy hasn't happened yet, it's only a matter of time. That means investors looking for explosive profit potential from the next "big thing" can find it in alternative energy stocks.

Like we said above, "if you just 'play the majors, you may find yourself with less than your fair share" of the massive gains ahead, said Moors. Instead, "the windfall profits in the months ahead will be reserved for a handful of small niche companies poised to become the biggest winners as energy truly goes global."

And we have one of Moors' under-the-radar renewable energy stocks poised for double-digit gains in 2017, right here...

One of the Best Renewable Energy Stocks of 2017