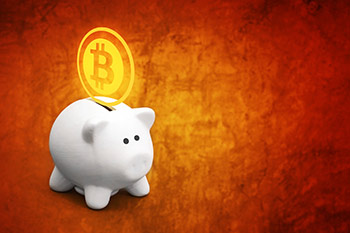 A few years ago, the idea of investing in Bitcoin was off the table for all but a handful of libertarian-minded technophiles.

But over the past two years, Bitcoin has matured – while the threats to global markets have grown increasingly dire.

Investing in Bitcoin is now an option retail investors can no longer afford to ignore. Many remain wary of this relative newcomer on the financial scene, but they need not be.

"Despite its proven value as a currency, Bitcoin, this "gold of tech" just isn't getting much love in the mainstream investing world, here or in Europe," said Money Morning Director of Tech & Venture Capital Michael A. Robinson.

He pinned the blame on the financial media's emphasis on problems in the Bitcoin universe, such as the hack of the Hong Kong-based BitFinex Bitcoin exchange earlier this month that resulted in the loss of nearly 120,000 bitcoins worth about $63 million.

Those kinds of stories are misleading for several reasons…

What the Financial Media Miss About Bitcoin

What those "hacking" stories fail to clarify is that in every case it was the exchange and its security that got hacked – not the Bitcoin protocol.

Meanwhile, positive developments such as the quickening interest from the world's top banks in Bitcoin's underlying technology, the blockchain, get much less coverage.

But these positive events, which feature dozens of heavy hitters in the financial world, have much more bearing on the viability of Bitcoin than a few hacked Bitcoin exchanges.

Related: A U.S. Bitcoin IPO Is Closer Than You Think

And now the influential are starting to notice.

"Investors, analysts, and politicians who were once negative about Bitcoin's prospects are starting to change their tune, in a bid to catch up to the visionaries who always had a grasp on the cryptocurrency's true potential," Robinson said.

He sees Bitcoin investing as a 21st-century version of investing in gold — the world's traditional safe-haven investment.

Making the Case for Investing in Bitcoin as a Safe Haven

"As the vote drew closer and 'Leave' versus 'Remain' options appeared to be in a statistical dead heat, gold jumped 3% in a week," Robinson said.

The day after "Leave" won, global markets plunged more than 5%, and those holding British pounds were down 8%. The trillions of dollars in losses reminded everyone once again why gold is thought of as the go-to safe-haven investment. 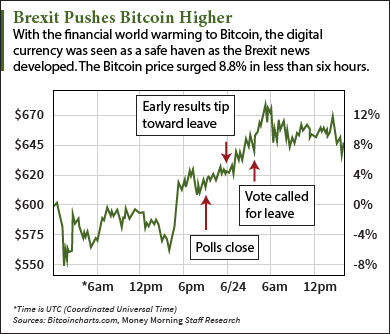 "Bitcoin is fast becoming a viable safe haven, in part because it's building a history of delivering during times of instability and volatility," Robinson said.But investing in Bitcoin was better. In the aftermath of the Brexit vote, the Bitcoin price soared 8.8%.

During last summer's Grexit, when the Greek government imposed strict capital controls, Bitcoin showed why in some ways it's an even better safe haven than gold. Not only did Bitcoin rise in value about 20%, but its utility as a currency helped many Greek citizens cope with the limits on ATM cash withdrawals.

Don't Miss: Why Americans Should Consider Voting Libertarian in 2016

This year, investing in Bitcoin in Venezuela has skyrocketed as the inflation rate has soared to nearly 500% and the government has imposed capital controls. Since the beginning of April, LocalBitcoins trading volume has more than quadrupled, with the value traded reaching the equivalent of $14.25 million.

While American investors don't have those kinds of worries (yet), the markets are especially vulnerable right now…

Why Now Is the Time to Invest in Bitcoin

In the past two years, we've seen volatile market reactions to everything from the devaluation of the Chinese yuan to the Brexit vote.

Years of central bank easing have artificially pumped up global stock markets, which keep rising despite anemic economic growth and stagnating earnings. And their negative-interest-rate experiment is bound to produce an unhappy ending.

The trigger for the next stock market crash could come from anywhere at any time. That makes investing in Bitcoin, among other safe havens, a top priority.

"When you consider the threat of ISIS, the strong dollar, and all the mischief from central banks, the case for Bitcoin as a hedge and haven – i.e., high-tech gold – becomes that much more powerful," said Robinson.

However, investing in Bitcoin does come with certain caveats. For one thing, the IRS treats Bitcoin as a commodity, so investors need to keep detailed records of their transactions since there's no broker to do it for you.

And as of now, the shortcut of an ETF (exchange-traded fund) does not yet exist for Bitcoin. But that will change when the Winklevoss Bitcoin Trust (BATS: COIN) gets SEC approval, which is expected to happen by early 2017.

For detailed tips on how you can start investing in Bitcoin today, check out the Money Morning guide on how to buy Bitcoins…

How to invest in Bitcoin? Is it through Trust or Stock?