Editor's Note: Bitcoin crossed $1,700 on May 9, less than a week after this story posted.

After gains of as much as 65% over the last five weeks, many investors are asking, "Why is the Bitcoin price rising?"

On the surface, the soaring price of Bitcoin doesn't make sense. Most of the Bitcoin news this year has been negative. 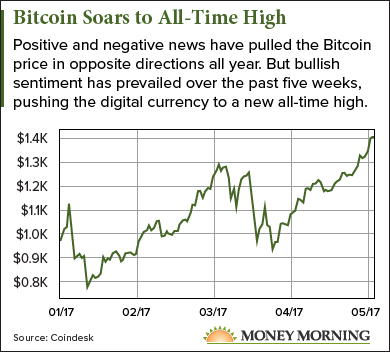 In early February, the People's Bank of China ramped up scrutiny of the Bitcoin exchanges, suspending Bitcoin withdrawals and compelling the exchanges to charge trading fees to cut down on speculation.

Meanwhile, the two-year "scaling debate" within the Bitcoin community has continued to rage unresolved. With increased use, the network has reached the limits of how many transactions it can handle. But the two sides differ strongly on how to fix it.

While the combination of those three issues managed to pull the Bitcoin price down to about $936 on March 24, it's been on a rocket ride ever since. Today (Wednesday), the digital currency broke through the $1,500 level on the Coindesk Bitcoin Price Index. [Editor's Note: Bitcoin hit an all-time high of $1,540.71 early Thursday.]

Here's why the Bitcoin price is soaring…

Why the Bitcoin Price Is Rising So Quickly Right Now

As often happens with rising Bitcoin prices, multiple factors appear to be at work.

On April 1, a law that made Bitcoin legal tender in Japan went into effect. The law triggered a wave of retailers announcing they would accept Bitcoin, which in turn spurred buying.

Less than two weeks later, the Russian government reversed course on Bitcoin. Where last year the Russian Foreign Ministry was threatening cryptocurrency traders with jail, now it's planning ahead for full legalization of digital currencies by next year. (The Russians haven't gone soft – they believe they can use the technology to combat money laundering.)

On April 25, the SEC caused a stir when it announced it would reconsider the Winklevoss Bitcoin Trust ETF proposal. The SEC hasn't change its position, but was simply responding to an appeal by the BATS BZX Exchange where the Winklevoss ETF would trade. But the news raised hopes (and Bitcoin prices) anyway.

A less visible factor in the rise of the price of Bitcoin is its connection to the trading of other cryptocurrencies.

Over the past few months, many of Bitcoin's most popular digital cousins have themselves soared in value, including Ethereum, Ripple, Dash, Litecoin, NEM, Golem, and Decred.   According to Coindesk, the average "blue chip" cryptocurrency (the 37 digital currencies with market caps of $30 million or higher) gained 180.56% in the first quarter of the year.

In many cases, traders use Bitcoin to buy these other cryptocurrencies either because it's easier or because they can't use fiat currency. But they need to buy the Bitcoin first, adding to demand.

Then there are the problems at the Bitfinex and Poloniex Bitcoin exchanges. Both exchanges were affected by a policy shift at Wells Fargo & Co. (NYSE: WFC) , which stopped processing transfers from the Taiwanese banks both exchanges use.

One would think this would be bad for the price of Bitcoin, but it had the opposite effect.

The Bitcoin price on both Poloniex and Bitfinex has soared past levels on other major Bitcoin exchanges. It's possible traders were buying more Bitcoin with their U.S. dollars so they could get their money out of the exchange.

At one point the Bitfinex price was as much as $125 higher than Bitcoin prices elsewhere. Whether it was arbitrage or psychology, the issues at Bitfinex and Poloniex have helped pull global Bitcoin prices higher.

All of these factors are contributing to why the Bitcoin price is rising so rapidly. But one development is having the biggest impact right now – and it's one that will keep driving the price of Bitcoin higher for many months, if not years…

Why the Price of Bitcoin Will Keep Rising

thanks for the great read david!
Just a month or so ago i was writing to you and felt quite concerned regarding a hard fork and slumping bitcoin values. I buy and hold and am in bitcoin for the long term, it is paying off bigtime. Everday there is an all time high. I realize anything could cause a correction but it sure has been an exciting week of watching the bitcoin price rise!