Attorney General Jeff Sessions is hell-bent on ending marijuana use in America, but he's only going to help it along. 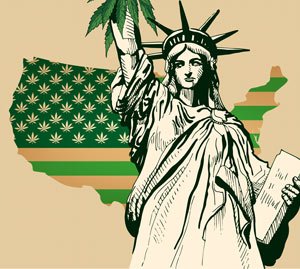 Last week, he declared he would be rolling back a regulation that protects non-violent drug offenders from serving maximum sentences.

"Attorney General Jeff Sessions is a marijuana flat-Earther, out of step with society and science, and way, way behind the times," said Money Morning Director of Technology & Venture Capital Research Michael A. Robinson, who has long been following the burgeoning marijuana industry, to readers on June 1.

Michael is our in-house pot stock expert, and he predicts Sessions will fall flat on his face trying to end legal marijuana across the nation.

"Legal marijuana is an unstoppable freight train, and there's hardly a thing Sessions could do to stop it," said Michael.

In fact, as Sessions continues his marijuana crusade, more states are going to push for legalization measures to protect their citizens from the strict prosecution he is gunning for. And as more states legalize, the country could see up to $28 billion in revenue – a huge opportunity for investors.

Here's how they could do it – and more importantly, how you could profit…

States Are Shielding Themselves from Sessions

In several states, citizens and lawmakers are coming together to find ways to keep federal agents out of their marijuana businesses.

In Oregon, Sen. Ron Wyden (D-OR) and Rep. Earl Blumenauer (D-OR) aim to protect their cannabis-using citizens and businesses from federal enforcement in one fell swoop with the "Path to Marijuana Reform," a package of bills introduced on May 4 in both houses. One bill in the package protects against federal intrusions by requiring cannabis shops to destroy records of what consumers purchase. Another aims to remove marijuana from a national registry of controlled substances and add a slew of new protections for consumers and industry workers.

The understaffed and strained Justice Department just doesn't have the manpower to prosecute a war on legal marijuana.

In California, lawmakers are in talks to give legal pot businesses the same kind of protections they have extended to immigrants in the country illegally, prohibiting law enforcement from helping federal agents target them.

And in Nevada, Sen. Tick Segerblom (D-NV) is speaking out against the federal government's attack on legal marijuana. "Pragmatically, I just don't see how [the federal government] can do it," Segerblom said to Las Vegas Sun on March 17. "You can't let the genie back in the bottle. And as more states legalize it, I just don't think there's any way to turn around and stop it all."

Must Read: These Shocking Marijuana Jobs Come with Salaries Up to $125,000

In addition to protecting their citizens, states could also invoke the Rohrabacher-Farr Amendment to shield their existing cannabis businesses from the long arm of the law.

You see, the Rohrabacher-Farr Amendment states that the Justice Department is not permitted to use any federal funds to go after marijuana operations, like shops and farms, once states have legal measures in place.

In addition, "the understaffed and strained Justice Department just doesn't have the manpower to prosecute a war on legal marijuana," said Michael. In fact, his team attended the Marijuana Business Conference & Expo last month near D.C. and spoke with a number of these lawmakers firsthand.

"The bottom line is, Jeff Sessions looks like he's just about out of options (or, more to the point, out of money) if he wants to use the full weight of the Justice Department to crack down and interfere with legal marijuana right now," said Michael. And the job will only get harder as more states rush to legalize…

In fact, three more states are expected to pass marijuana measures just this year – bringing the grand total to 31 states.

We love the sound of that. As more states become marijuana-friendly, more opportunities for investors to profit emerge…

Marijuana Is Still a Huge Opportunity for Investors

You have to have blinders on to not understand how large of an industry this can become.

States and businesses have begun to rely on this income in order to build schools, repair roads, and stabilize budgets.
In fact, according to the Tax Foundation, marijuana tax collections in Colorado alone totaled $113 million from 2013 to 2015, exceeding initial estimates by over $43 million.

Should legalization become status quo nationwide one day – which is becoming more likely as states work to protect their citizens from Sessions — the country could see up to $28 billion in revenue for federal, state, and local governments, according to the same report from the Tax Foundation.

And that's just the tax revenue. Analysts predict the entire industry is poised to generate over $24 billion in wealth by 2025, creating over 300,000 jobs along the way.

That's a business boon that America – and investors – would like…

"I couldn't be more excited about the innovation and extreme profit potential in this new market," said Michael.

Editor's Note: Robinson has a proven track record of identifying the top marijuana stocks in the industry better than anyone else. Don't miss an opportunity to receive his time-sensitive free report, where he shows investors how to earn gains of over $100,000 by capitalizing on the marijuana industry right now.

I am in New Zealand and the politicians here have been too frightened to take bold steps to legalize the use of marijuana even for medical use and in particular pain relief.
Now finally they are going to consider allowing the use of epidiolex.
Hopefully with the rest of the world leading the way our scared politicians will finally get with the program and start considering the very real benefits that stem from Marijuana.

Sounds Interesting to me…

It's looking like Mr. Sessions could end up being fired if you have been watching the news lately. Here's to hoping….

i H AVE A COUPLE OF DIFFERENT TYPES OF PENNY STOCKS CAN YOU TELL ME ANYTHING ABOUT CBIS, I HAVE 148114 SHARES MY AVERAGE COST IS 0.084 PER SHARE IS IT A HOLD OR SELL