And that's despite a sudden 47% drop in late May. Within days, the Ethereum price had bounced back to its previous highs. 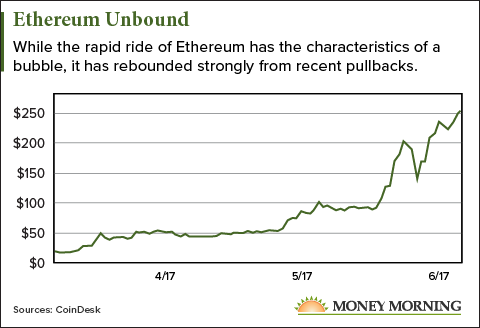 The rapid rise of the price of Ethereum mirrors that of other cryptocurrencies. The price of Bitcoin, the No. 1 cryptocurrency, touched $2,967 today to make an all-time high of its own.

The enthusiasm for digital currencies may be overheated at the moment, but the long-term potential is real.

The Ethereum price is rising like a missile because of these five powerful catalysts...

Why the Ethereum Price Has Taken Off