Sometimes great stock picks come in pairs. That's why for this round of the best stocks to buy now we'll be giving you two ways to play each profitable trend our investing experts have highlighted. 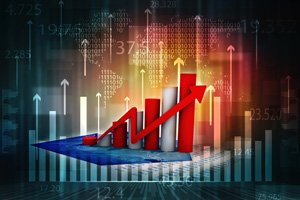 First, we'll look at a gigantic new private equity fund and highlight two ways you can profit from the owner's knack for king-making.

Next, we'll talk about the home services market, which appears to be immune to the Retail Ice Age. A new merger in this market gives investors two entrances as the industry moves online.

Finally, U.S. President Donald Trump's Paris Agreement exit has some people worried about the future of renewable energy. But the action in Europe and Asia is as hot as ever, and we'll tell you two companies that stand to benefit.

Let's take a look at our new list of the best stocks to buy now.

Imagine watching one of your investments surge by 40% in the blink of an eye.

That's what happened in May to Paytm, India's largest electronic payment company. The reason? The world's largest private equity fund had just pumped $1.4 billion into it, bringing Paytm's total value to $7 billion.

That $1.4 billion is a drop in the bucket. The private equity fund just closed with $93 billion in initial commitments and aims to reach $100 billion over the next six months. Backers include heavy hitters such as Apple Inc. (Nasdaq: AAPL) and Qualcomm Inc. (Nasdaq: QCOM).

Softbank is run by Masayoshi Son, who has made a name for himself funding tech startups since the 1990s. Back in 2000, he injected $20 million into a small Chinese e-commerce company founded by an English teacher. That company was Alibaba Holding Group Ltd. (NYSE: BABA), now known as the Amazon of China, and Son's stake is estimated to be worth over $100 billion.

Thanks to that and other wildly successful investments, money tends to follow Son wherever he goes. His investments in ride-sharing service Didi Chuxing and WeWork Cos. Inc. pushed valuations up immediately.

That gives us two plays on Softbank's Vision Fund.

First, you can invest in Softbank to benefit from Son's Midas touch. Money Morning Chief Investment Strategist Keith Fitz-Gerald says Son's track record speaks for itself. "There is little doubt in my mind that you've got a legacy holding on your hands" if you invest in Softbank, he told readers in May.

Second, you can jump out in front of this development by investing in the kinds of companies the Vision Fund will be attracted to. The key here is that you don't need to pick stocks that Son and his team actually end up investing in. That would be great, but the Vision Fund is so large and Son's gravitational field so wide that investors are going to end up shelling out more money for tech startups across the board. So being exposed to a variety of up-and-coming companies early in their development is a great way to cash in on the Vision Fund's impact.

For that, it's hard to beat the Fidelity Contrafund (MUTF: FCNTX), which holds positions in pre-IPO startups such as Airbnb, Dropbox, and Pinterest. Formed in the 1960s and tasked with finding undervalued companies, the Contrafund combines the excitement of ground-floor investing with the stability of a growth fund. $10,000 invested in 2007 would be worth just under $23,000 today. With all the money in the market looking for a home, there's every reason to believe the fund's stellar performance will continue.

Here Keith Fitz-Gerald gives us the full scoop on Softbank's Vision Fund, including Son's 300-year plan for the company.

Best Stocks to Buy Now: The Online Revolution Is Snatching Up Retail's Most Bulletproof Sector

While the Retail Ice Age is amassing an impressive body count among brick-and-mortar retail stores, the home services sector continues to thrive. Home Depot Co.'s (NYSE: HD) first-quarter earnings were up 16% from the previous year and 44% from two years earlier. The numbers for Lowe's Co. Inc. (NYSE: LOW) are even more impressive, at 18% and 47% respectively.

But that doesn't mean the online revolution isn't taking over home services. As more and more millennials are becoming homeowners, they are increasingly looking online to find contract professionals such as plumbers, electricians, and painters. And two major players in that online market are about to join forces.

In May, New York-based IAC/InterActiveCorp (Nasdaq: IAC) announced it would buy Angie's List Inc. (Nasdaq: ANGI) in a deal that will close later this year. IAC will be combining Angie's List with its HomeAdvisor service under the name ANGI Homeservices Inc.

Still, the vast majority of the home services market remains offline, and no company has yet emerged as the Google or Amazon of the marketplace. The merger gives ANGI a big leg up in that race.

A 2016 report by the Farnsworth Group showed that 36.4% of home services consumers age 21 to 34 had used Angie's List while 27.3% had used Home Advisor. The numbers trail off for older consumers, but obviously the market landscape is shifting. 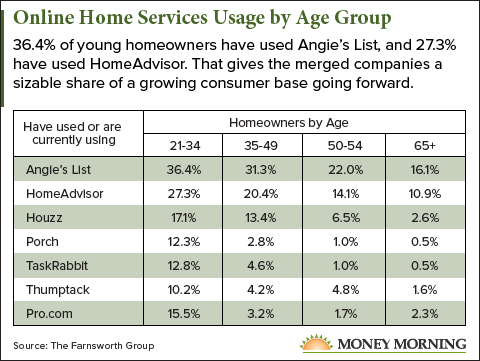 And as online services take a bigger slice of the pie, the pie will continue to grow. A 2017 report from Technavio predicted a compound annual growth rate of 49% in the home services market over the next four years.

Now, the two ways to play this development...