When it comes to countering North Korea's increasing threats, the best-case scenario for the United States right now involves significant help from one of our most notorious fair-weather friends….

Money Morning Executive Editor Bill Patalon has been following trade developments and "backdoor deals" between Pyongyang and Beijing for over four years. And his sixth-sense insight is telling him that "China's cooperation with the United States would be the most effective option if we truly want to counter North Korea."

"But that would be costly," Bill adds.

Specifically, there are two demands China would likely present to Washington in exchange for its help.

Here's a look at those two demands….

China Will Demand U.S. Withdrawal from the South China Sea

"First," Bill says, "Beijing would want the United States out of the South China Sea situation." 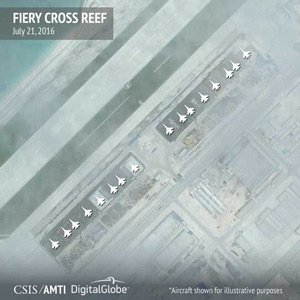 China's building efforts on the artificially made "Fiery Cross Reef" show two potential military hangars on the southern end of the runway.

The ongoing fracas in the South China Sea is an issue Bill has been warning his Private Briefing subscribers about since 2013 – years before it hit the mainstream media's radar.

And when it comes to the United States' presence in the resource-rich region to which numerous nations lay sovereign claim, Bill says Beijing wants Washington out.

"China's stance is against the United States 'militarizing' the South China Sea," Bill writes. "When Beijing built artificial islands complete with airstrips, ports, and missile-defense systems in the region last March (2016), Beijing claimed it was merely protecting its sovereign territory." 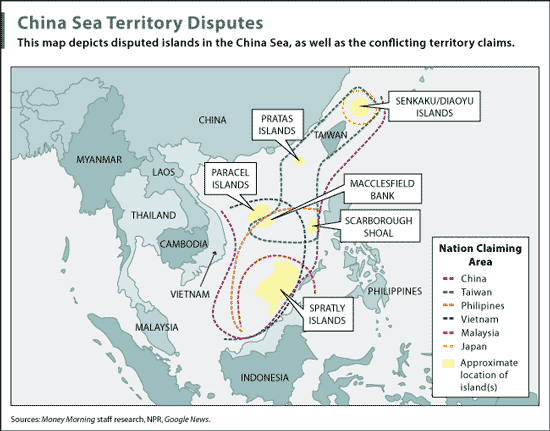 Of course, that artificial archipelago – and all the battle-ready accoutrement it came with – implied a much grimmer reality…

China has been prepping to exert its territorial claims in the South China Sea militarily.

There's just been one obstacle stopping China from doing so…

You see, U.S. Navy ships have been breathing down the Red Dragon's neck in the contested waters, patrolling the area in an effort to maintain "freedom of navigation" for the thousands of trade routes therein.

Demand No. 1 could easily be America's withdrawal from the contested waters, effectively giving Beijing free reign to exert its sovereignty by any means it so chooses.

China Will Demand the Removal of THAAD Systems in Asia

"China would want all of the THAAD antimissile systems out of Asia," Bill says.

The U.S. military's Terminal High Altitude Area Defense (THAAD) missile defense system is a point of contention between the United States and China.

Currently, there are two such systems in the Pacific — one in South Korea and another in Guam.

Both Washington and Beijing know full well that targeting enemy missiles isn't the only job THAAD is capable of.

It can also spy on other nations.

Specifically, the system could detect Beijing's own nuclear deterrent systems – its armament stockpiles, that is – to see if any Chinese missiles are active.

Bill lays out the implications of this technology: "THAAD… provides America with an 'early warning' of China-launched missiles, which would give America a 'first-strike' capability."

To many readers, the mere thought of "China-launched missiles" seems totally implausible because of the greater implication it carries: a U.S.-China war.

But Bill knows such a war is a possibility. Especially considering that Beijing has been perfecting its military weapons stockpile for years in case it might need it… say, in the South China Sea.

On top of that, China wants to keep the threat of democratic ideology at bay. That's another reason behind Beijing's self-imposed status as North Korea's economic bedrock – the North's regime serves as a buffer between Communist China and a "Westernized" South Korea.

So it would hardly be a strenuous effort for the Red Dragon to turn its massive muzzle toward Seoul in an effort to thwart a growing U.S. (read: democratic) influence there.

Or at least, it wouldn't be strenuous if China didn't have the THAAD to contend with.

And with Washington pressing Beijing for help with Pyongyang, it's only natural that the Red Dragon would take the opportunity to suggest that the United States remove the THAAD system entirely.

In short, meeting these two demands – removal of THAAD and withdrawal from the South China Sea – would grant China massive influence in the region in exchange for helping to stifle a dangerous and unpredictable nuclear power.

For the Trump White House, this would be a matter of choosing between two evils.

How to Deal With a Problem Like Kim Jong Un

On Tuesday (July 4), Trump tweeted, "Perhaps China will put a heavy move on North Korea and end this nonsense once and for all!"

The next day, POTUS was less optimistic…

"Trade between China and North Korea grew almost 40% in the first quarter [of 2017]. So much for China working with us – but we had to give it a try!"

Trump's tweets were followed by a joint press statement issued from both Russia and China yesterday. And though the two countries reiterated their call for North Korea to halt its missile and nuclear tests, they publically requested that – in exchange – the United States and South Korea hold off on large joint military drills.

Within hours of the statement, however, the United States and South Korea announced they had just held a new ballistic missile drill to counter "North Korea's destabilizing and unlawful actions," reported CNN today.

It's not hard to deduce why the United States and South Korea opted to conduct these drills after Russia and China made their joint public "suggestion." The two nations were sending a clear message:

"We won't be taking orders from other world powers, thank you very much."

Their response culminates in an unfortunate extra layer of infighting around the "North Korea problem." It's no longer "America versus China," but now "America and South Korea versus China and Russia" instead.

All over the fate of Pyongyang.

While world powers continue to exert their dominance over the fate of Kim Jong Un's kingdom – and believe me, with THAAD and the South China Sea on the table for the United States, no consensus will be made between these nations any time soon — Kim Jong Un's kingdom will carry on testing its ICBM missiles, nuclear warheads, and spy drones.

When the THAAD System Fails, Drones Will Succeed

While we're on the subject of the THAAD system…

There's another "catch" to it…

Despite its status as the "best of the best," insofar as global defense systems are concerned, it would fail miserably against one specific threat posed by North Korea…

But that's where drones would pick up the slack…

This capability makes this technology a must-have for the United States as tensions mount in East Asia over the fate of North Korea.

And Bill's favorite drone play right now is one of the only publicly traded companies active within this niche defense sector.

And if this company keeps growing right along with this industry, as Bill expects it will, its revenue could leap from today's $264 million to $15 billion by 2020.

To learn more about this drone pick, plus several more, go here to find out how to subscribe to Private Briefing…