Presidential advisor and first daughter Ivanka Trump's childcare tax credit could be expanded far beyond its original scope, if Democrats have anything to say about it. 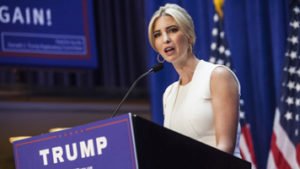 The childcare tax credit currently on the table is borne of a single line in Trump's tax plan:

This promise, however vague, could open the doors to massive government spending.

The Washington Post posited on April 28 that the White House was likely considering a boost to the Child and Dependent Care Tax Credit (CTC), which allows parents to cut up to $1,000 per child, per year from their tax bill.

These suspicions were confirmed a couple weeks back when - on June 20 - the White House announced Sen. Marco Rubio (R-FL) and Ivanka had met to discuss the expansion of child tax credits.

They were joined by a handful of congressional Republicans that day, who dispersed from the meeting to tout their newest idea: expanding the CTC to $2,500 per child, per year.

But changing Trump's tax proposal to further expand this particular childcare tax credit comes with a dangerous possibility that has gone unnoticed...

Putting Childcare on the Table Is a Dream for Democrats

That's because the relief it would give parents is actually miniscule relative to what they spend on their children each year.

On average, full-time childcare in this country costs anywhere from $5,000 to $15,000 annually depending on the state and age of the child, according to a 2016 report from non-partisan resource organization Childcare Aware of America.

And the suggestion of expanding financial benefits to families - especially with the knowledge that even $2,500 per child won't be enough - leaves the door wide open for Democrats to march through...

After all, "affordable" childcare is one of the party's main talking points...

In her 2016 presidential campaign, former Secretary of State Hillary Clinton promised that no family would have to spend more than 10% of its income on childcare expenses were she to become president.

In fact, under the Clinton plan the federal government was slated to subsidize 80% of the cost of childcare.

On May 12, 2016, The Washington Post crunched some numbers that had been touted by the former first lady's camp.

The news outlet came up with a general guess as to how much the CTC would be expanded under Clinton's lead...

Paid for by... massive tax hikes for both the middle and upper classes.

What's more, there are legislators still fighting Clinton's fight even now that President Donald Trump is in charge...

In February, Rep. Rose DeLauro (D-CT) sponsored the Child Tax Credit Improvement Act, which calls for a $3,600 expansion to the CTC.

That's just $1,100 more than what Rubio and friends are pressing for.

Democrats Are Preparing for War

In short, Trump's tax plan may force the GOP between a rock and a hard place: The party may be forced to give up more than it wants in child tax credits - otherwise, it risks the Dems turning the whole tax reform process on its head.

After all, the majority of congressional Democrats already oppose Trump's new tax cuts.

And they've started to signal "revolt."

And on June 15, a coalition of centrist House Democrats known as the "Blue Dogs" issued a public statement that they would prefer tax reform legislation to move through Congress in "regular order."

That's because congressional GOP leaders have said they plan to pass tax reform legislation through "reconciliation" - which requires a simple majority of votes to pass - in order to prevent a Democratic filibuster.

The Blue Dogs also announced that they have started inviting interest groups and bipartisan policy experts to their tax reform meetings.

They've even invited stakeholders in the famed Republican party lobby organization "The K Street Project" for their input on tax reform.

The Democrats are prepping to fight on tax reform. And any inch the Republicans offer may quickly become a mile...

Money Morning Capital Wave Strategist Shah Gilani isn't keen on most - if not all - aspects of the Trump tax plan.

Shah is a distinguished "trader's trader" and a 30-year market veteran who has been following the actions of the new administration closely.

"[The tax plan] just doesn't make any sense to me," Shah told FOX Business on April 19. "This president has been wallowing in miscommunication with his own administration and with the public, and he needs to fix that. I think the way to do that is to cut personal taxes."

Whether individuals stand to win or lose from Trump's tax overhaul, there's one stock out there that's going to win big...

Here's why Shah says Trump's tax plan could mean a massive windfall for this tech giant, which could reach a trillion-dollar valuation by next year...

No one can hijack anything if the person involved is an honest and a do goober ,not greedy, unethical and immoral and a show offer.
If her morality and intent were so honorable, then she would succeed. If not she definitely will flunk!
SAubraminmum

Corruption has ruined American capitalism. Eisenhower's leadership needs to be remembered instead of Ronald Ray Gun.