The stock market is on a record-breaking bull run, with the Dow topping 22,000 for the first time this month. But while the stock market soars to new heights, investors are beginning to wonder if we are in a stock market bubble… 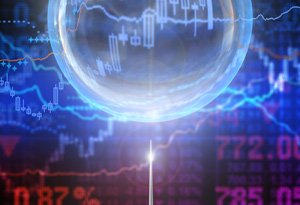 While we think stocks still have plenty of room to head higher and see no signs this run is anything like the tech bubble of the 1990s, investors can always prepare themselves for the unexpected.

One reason a stock market crash is so destructive is that few people see them coming, and then investors rush to exit stocks once it's too late.

Ahead of the 1929 stock market crash, the Dow raced to a more than 300% gain starting in 1922. But investors mistakenly believed there would be no end to soaring stock prices. Famed Yale economist Irving Fisher said stocks had reached a "permanently high plateau" just a month before the 1929 crash.

And when the market fell, unprepared investors panicked, sending stocks plummeting. The Dow lost 86% of its value between 1929 and 1932.

That sort of loss is why we want our readers to be prepared no matter the situation. Even though we aren't in a stock market bubble, there are some signs stocks are trading higher than their fundamentals.

Here are the latest stock market crash warning signs, plus the best way to protect your money during a correction or crash…

Don't Wait for a Stock Market Bubble to Protect Your Money

Stocks have been soaring, which is usually a great sign for investors, but there are some warning signs too.

This made borrowing money cheap in hopes that businesses would use the money to stay open and expand. Instead, publicly traded companies used the cheap money to repurchase shares of their own stock.

Between 2009 and 2016, public corporations borrowed more than $1.9 trillion, while $2.1 trillion was used to repurchase shares of their own stock.

That's part of the reason some metrics are showing stocks are overvalued.

The Shiller P/E ratio – a commonly used measure of stock market value – is currently at 30.4, 81% above its historical average.

The 2 Best Stocks to Own in a Stock Market Crash