China has been benefiting from North Korea's weapons tests and threats toward the United States lately.

You see, the Hermit Kingdom's increasing aggression tactics - including its possible detonation of a hydrogen bomb last Saturday (Aug. 2) - has drawn Uncle Sam's focus so completely in recent months that U.S. involvement in other Pacific maritime disputes has all but failed. 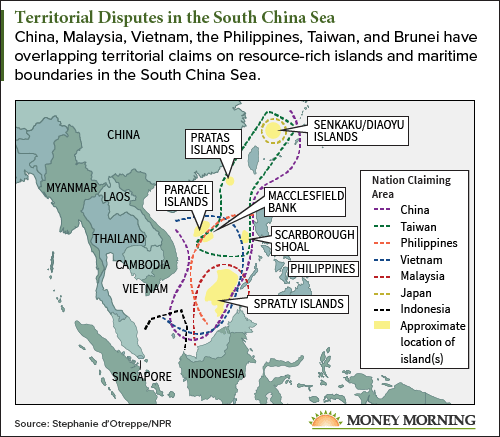 If you've been following along with us, you'll know that China has laid claim to an enormous swath of the South China Sea, known as the "nine-dash line," ignoring six governments' claims as well as an international ruling from the Hague Tribunal.

China's New Approach: Out with the Old Tricks, In with the New

While America has been pressuring China to sanction North Korea, it has all but ignored China's recent actions in the South China Sea.

Since April 11, U.S. President Donald Trump has tweeted about China 16 times. Each tweet has mentioned China's attempts (and failures) to curtail the Hermit Kingdom's missile program, and not a single one has addressed its actions in the South China Sea.

In these tweets, Trump has hinted that he will be more willing to strike better trade deals with China if it helps disarm North Korea. But if the United States won't pay attention to developments in the South China Sea, it may lose the leverage needed to strike any kind of trade deal at all.

You see, China has found new ways to gain diplomatic ground in the South China Sea while America has been focusing on Beijing's relationship with Pyongyang. In addition to its "old tricks," China's tried a few new ones in its efforts to gain total sovereignty over the resource- and trade-rich waters...

And, for the nine-dash-line countries involved, China does seem to make for a more useful diplomatic cohort these days than the United States, which has done little in recent months to reassure them of its loyalty and protection. Indeed, the most we've seen from America in this region is a joint statement on Aug. 6 with Japan and Australia calling for Beijing to abide by a South China Sea "code of conduct."

And after China completely ignored the Hague ruling in the Philippines' favor last year, a code of conduct seems laughably inadequate.

Overall, this change of heart in the South Pacific could very well indicate Washington's slow but steady exclusion from the region.

What a U.S. Shutout in the South China Sea Would Look Like

With constant chemtrails in our skies, it would be hard to recognize the N. Korean planes…we don't even see starts at night…SF

That evilist middle kingdom China is taking advantage of the situation to colonize what ever they can, the world should stand up and teach that bastardized a lesson.

this artical is vicious and try to stoke fire and make trouble in s.c.sea.a thing the typicle evil want to domm