America has, for quite some time, helped set China up for success.

In the 70s, for example, we helped Beijing start its global "normalization" process, bringing the nation onto the world foreign trade and economic stage.

Then, in the 80s, when China began to initiate its "reforming and opening" diplomatic policies, we helped broker new relationships between the Asian nation and other world powers.

Soon after, Beijing's economy began to swell and thrive at an unprecedented rate. 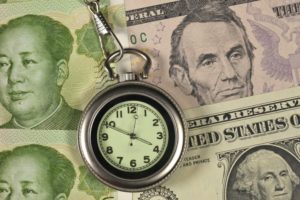 Which brings us to the rather sticky situation the United States and China are in today.

Don't be fooled by China's unexpected cooperation with the United States over North Korea yesterday; between a massive trade imbalance and growing tensions in the South China Sea, U.S.-China relations are far from perfect. After years of American aid, Beijing is shirking the very diplomatic relationships that helped the country become what it is today.

And soon, China will surpass America in three major ways, resulting in a never-before-seen global power shift in which the United States will surely suffer.

That's the thanks we'll get in return for our help.

U.S. Military Preeminence Is No Longer a Sure Thing

By 2025, China will pose a greater military threat to the United States than any other nation, according to America's highest-ranked military official, General Joseph Dunford, on Wednesday (Sept. 27).

This is because China's armed forces have been catching up to America's for quite some time.

And Beijing has the physical and geographical resources to prove it.

China's military boasts 2.3 million active members on duty, whereas the United States has about 1.4 million, according to a report issued in March 2016 by the government-focused think tank Congressional Research Service.

The significance of that 1-million-man difference in force is magnified when you consider the following:

American troops are spread out at posts all over the world - Afghanistan, the Ukraine, Europe, etc. However, 99.96% of China's fighting force - which is, again, 64% larger than that of the United States - is concentrated in China's immediate vicinity.

This gives Beijing an extra advantage should a war break out over North Korea or the South China Sea. It will have all of its own manpower at the ready should conflict erupt in its backyard.

On top of that, the Red Dragon now boasts incredible space assets, including 70 military satellites used for communications, navigation, positioning, and, most importantly, signal disruption. A decade ago it had about 30, The New Atlantis reported in 2007.

The country's creation of "signal disruption" satellites suggests that the satellites were built to target U.S. space assets by scrambling the GPS signals they use.

You see, China sees America's GPS and satellite communication reliance as a weakness.

In addition to signal disruption technology, the Red Dragon has also developed anti-satellite projectile weapons, which it displayed back in 2007 when it shot down one of its own weather satellites with a ballistic missile test.

In short, Beijing has been inventing upper atmospheric weapons specifically designed to shoot down or disrupt space assets of our own.

And China's rapid technological development doesn't stop with its military...

China's Already Starting to Take Over the Tech World, Too

From the 80s to the mid-2000s, Uncle Sam enacted an "open era of tech" transfer initiative with China, allowing companies in both countries access to one another's tech ideas.

The difference is that China seems to think it's a race and America doesn't.

We also have been granting Chinese tech entrepreneurs L-series visas with which to live and work in the United States for years. In fact, in 2015, Washington issued a whopping 10,258 of such visas to Chinese businesspersons - nearly four times the amount issued in 2005.

But it's not been a reciprocal relationship....

Especially with Chinese President Xi Jinping's aggressive push to see his nation surpass the United States in tech entrepreneurship and innovation. Xi has been making this push while turning a blind eye to the countless number of cases of stolen American intellectual property incidents committed by his country's citizens and corporations.

Additionally, Xi's government began readying itself this past June to spend a whopping $150 billion on initiatives to fund future moonshot tech projects, startups, and academic research by 2030.

It's doing this to specifically expand Beijing's artificial intelligence (AI) capabilities, James Lewis, a senior fellow at the U.S. Center for Strategic and International Studies, told The New York Times on May 27 just ahead of the release of that exact $150 billion sum from Beijing.

China's domination of the global tech world over the next decade and beyond depends - and has since Xi's presidency began in 2012 - on one factor...

You see, China is spending more on tech just as the United States is cutting back.

"It's a race in the new generation of computing," Lewis told NYT about this upcoming shift in international tech power. "The difference is that China seems to think it's a race and America doesn't."

Indeed, the White House's May 22 budget proposal called for cuts to funding for a variety of agencies that have traditionally backed tech - especially AI - research. For example, the Advanced Technology Vehicle Manufacturing Program and the Securities and Exchange Commission enhanced cybersecurity fund are both on Uncle Sam's proverbial chopping block.

And tech isn't the only sector in which China is catching up to America. China's entire economy, once gasping for air, is now healthily aflutter, looming large over the United States...

While the United States is the leading economic superpower in the world for now, its preeminence will soon start dwindling, according to a February 2017 report by global business and economics think tank PricewaterhouseCoopers. According to the report, China's economy will lead the global way by 2025.

"In this time of intense angst about America's greatness (or, as some argue, loss of it), weak economic growth, and perhaps waning U.S. influence in the world, here's a perspective you won't hear much," wrote Geoff Cohn, Fortune's editor at large on Feb. 9. "America's economy will not be the world's largest for much longer."

At least on a purchasing-power-parity (PPP) basis - which looks at a country's gross domestic product (GDP) adjusted for international exchange rates and costs associated with local purchases.

By 2025, Beijing's economy will boast $32.7 trillion in growth while the United States is expected to clock in at roughly $21.7 trillion, according to the think tank's analysis.

Perhaps even more alarming is the projected rate at which China's GDP will expand versus that of that of America.

China is actively taking steps to realize this economic explosion. President Xi hosted 30 world leaders at the first "Belt and Road Forum" - his trade legacy initiative backed by hundreds of billions of dollars for infrastructure projects. More than 100 countries on five continents have signed up for the "Belt and Road" initiative, which shows a strong demand for global economic cooperation despite rising protectionism in the United States and Europe.

China Is Prepping for Global Preeminence... Is the United States Prepared?

Money Morning Executive Editor Bill Patalon has been following China's development for three decades and lived in China during his business journalism days, so we asked him for his insight on China's impending ascent to global dominance.

His answer: "China is planning it that way."

China, Bill explains, plans on a much longer timescale than the United States does.

"Here's something most folks in this country - including lots of people 'inside the Beltway' - don't get about China," Bill says. "Leaders in the Asian culture don't think about things just in terms of 'the now' or 'the near term'... [or even] the long term, which we view as two years, or five years, or (god forbid!) ten years.

"In Asia, effective leaders think about problems... in the context of decades, generations, even centuries."

Indeed, thanks to Beijing's duration planning, China will become the new "axis" around which the world's economy turns - if the United States allows it to.

"[China] just needs to dominate as that sphere of influence shifts to Asia," Bill says. "It needs to have a military capable of elbowing the U.S. military aside."

That shift won't happen overnight. But "with the 'Asian long view' working to its advantage, [China] will make it happen." 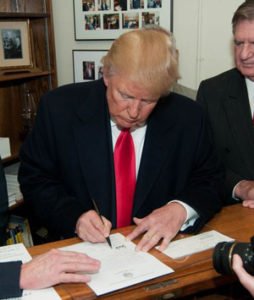 Unless, Bill points out, U.S. governmental powers come together to craft a focused strategy aimed at keeping this scenario at bay.

On Aug. 14, for example, Trump signed a memorandum that directed U.S. Trade Rep. Robert Lighthizer to determine whether an investigation is needed into alleged unfair Chinese trade practices.

We are also betting on Trump to keep our defenses stalwart in the face of China's military growth. You need look no further than the freedom-of-navigation operations in the South China Sea, or missile defense systems like THAAD set up in South Korea, Guam, and Alaska.

This is where the rubber hits the road for investors.

We like Boeing Co. (NYSE: BA) in this space.

Not only is Boeing one of the contractors behind the THAAD missile defense system, but the company also announced just seven days ago (on Sept. 22) that it expects southeast Asia's demand for its passenger aircraft to reach $650 billion over the next 20 years.

And yesterday, BA revealed that it has received a new order from Qatar Airways worth $2.16 billion.

So there's plenty of room for growth in the years ahead.

And check out the growth it's realized since Bill first recommended Boeing in 2011...

To get more of Bill's perceptive profits plays, we suggest subscribing to his Private Briefing. In fact, Bill has recently found a $13 billion anomaly he calls the "Halley's Comet of investing." It's very rare, and fleeting, and Bill sees things lining up perfectly to bring some very sizeable profits to well-positioned investors. Sign up for Private Briefing here...