When it comes to North Korea, all signs point to a Trump-China deal. 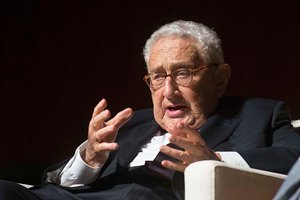 Kissinger famously orchestrated the "grand bargain" between President Richard Nixon and China's then-leader Mao Zedong in 1972, which opened the way for America and China to team up against the Soviet Union.

That was when Nixon visited Beijing – a first in over two decades for a U.S. president to go to the People's Republic of China (PRC), which was then a poor and insular nation.

And President Trump will visit China on Nov. 3.

Furthermore, the president invited top defense officials to Tuesday's meeting – including Secretary of Defense James Mattis and the Joint Chiefs of Staff Chair General Joseph Dunford – to discuss potential options for responding to any North Korean "aggression," as well as how to prevent Pyongyang from threatening the United States with nuclear weapons.

Kissinger's presence, in particular, may have had a subtle message for China's eyes…

That America is ready to draw up the specifics of a "grand bargain 2.0" next month.

A Trump-China Deal Next Month Would Be Kissinger's "Grand Bargain 2.0"

We expect Kissinger to coach the president to use the same tactics with China and North Korea that he used with Taiwan in 1972.

First, Trump would have to press Beijing to use all its diplomatic and economic leverage to pressure North Korea into giving up its nuclear program. This is how he managed to get the Chinese to agree to a peaceful settlement over Taiwan in 1972 – by acknowledging the country's power and asking it to wield it in the name of peace.

In return, the United States would agree to draw down its 29,000 troops in South Korea – a big sticking point for China right now – just as we agreed to pull our forces from Taiwan in 1972.

A "moonshot" of a deal, you may say, but not wholly unheard of where Kissinger is concerned.

Kissinger is, after all, still favored by the Chinese as a diplomat who truly understands the nation's objectives, reported The South China Morning Post on Sept. 27, 2017.

And since Kissinger's approach to the nation 45 years ago, China has taken on ever-greater importance for U.S. foreign policy. Beijing has Kissinger to thank for that.

So, not only could the strategy work, but Kissinger's presence in the White House alone could grease the wheels for a Trump-China deal.

And then there's the fact that Trump loves making bold moves, and if he wants to make one now on North Korea, diplomacy might be a better option than a potentially brutal and bloody war.

Still, there's no guarantee that a "grand bargain 2.0" would work.

How "Grand Bargain 2.0" Could Fail

For one, Kim Jong Un might perceive a bargain struck between Washington and Beijing as a hostile act in and of itself, causing him to cling even more tightly to his nukes. North Korea is, after all, much more volatile than Taiwan was.

Second, China may not have as much economic sway over the North as it once had – especially since Russia has stepped up its game to keep Pyongyang economically (and militarily) afloat.

In fact, much to the United States' dismay, Russia and China have been working together against America's military for quite some time now – albeit in a different part of Asia.

Which brings us to reason number three for why Kissinger's "grand bargain 2.0" might not actually work.

The United States won't agree to remove its military presence…

In August, China and Russia teamed up to create a "double-freeze" plan to deescalate tensions between the United States and North Korea.

Under the plan, North Korea would suspend its nuclear and ballistic missile tests. In exchange, the United States would stop conducting military drills with South Korea.

The United States rejected the proposal, saying it has every right to conduct exercises with South Korea, an ally.

This plan could have deescalated the tensions between America and North Korea, but it would have also provided China with an additional perk. Without a partnership with South Korea, the United States would have less of a presence in the South China Sea.

To be prepared for any act of war from North Korea, the United States had to reject this deal.

And unfortunately, tensions are only going to increase as South Korea and the United States have a joint exercise planned for the middle of October.

Investors should look to prepare.

And one sound defense sector investment we love is Boeing Co. (NYSE: BA).

Not only is Boeing one of the contractors behind the THAAD missile defense system stationed in South Korea, but the company also announced on Sept. 22 that it expects southeast Asia's demand for its passenger aircraft to reach $650 billion over the next 20 years.

So there's plenty of room for growth in the years ahead.

And that's not even the best growth opportunity in the defense sector. Right now, we're showing readers an American defense contractor poised to turn a small stake into $19,690.

And thanks to this small $6 defense firm with its top secret new technology, China is about to be taken to the woodshed. Frankly, you have to see it to believe it…