Energy stocks will always be in demand, but the best solar stocks in 2018 are on the cusp of truly once-in-a-lifetime growth... 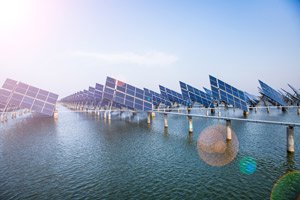 According to the U.S. Energy Information Administration (EIA), global energy demand will rise 25% by 2040.

While demand across the world is growing, solar energy is poised to outgrow traditional energy sources like oil, coal, and natural gas.

That could increase demand for solar energy by 500%, and that means it's still early to jump into solar energy investments...

And solar power has the most explosive potential of any form of energy, renewable or not.

In the United States alone, solar power generation will skyrocket 500% from now until 2040, according to EIA forecasts.

Solar energy's potential comes from three catalysts: It's clean, it's unlimited, and it's increasingly cheap.

The World's First "Universal Fuel": Some of the biggest investors in the world are quietly moving money into a fast-growing sector. See where the big money is headed right here...

As the world shifts toward cleaner forms of energy, finding energy sources that produce little or no carbon emissions is becoming a priority.

The Paris Climate Accord - ratified by 168 countries in 2016 - set out a goal for all countries to reduce carbon emissions "as soon as possible."

With countries across the globe planning to cut carbon emissions, even as energy demand rises, renewable sources are the only option.

Even though natural gas produces about half the carbon emissions as coal, both forms of energy will eventually run out. And as the supply dwindles, the prices will rise.

That's not the case with solar power. Energy from the sun is ample and permanent.

That what will also help keep solar power cheap...

Third, the costs of solar power are rapidly dropping, and it's making it cheaper than fossil fuels.

Now, solar is at grid parity in at least 20 states, and not just small states where options are limited. The states range from New York to California.

That's no surprise, either. The costs of solar energy are rapidly falling. The cost of solar power is currently only 1/150th of its cost four decades ago, and it's down 10% just over the past year.

And now that solar power is nearing grid parity across the country, it's creating massive potential for solar energy stocks. The EIA projects that electricity coming from solar power could rise by over 60% between now and 2018.

But the United States isn't even the best catalyst for solar stocks...

China Is a Solar Powerhouse, and It's Just Getting Warmed Up

China is already the world's leading producer of solar power, and more than 60% of all solar cells on the planet are manufactured in China. But its expected growth is staggering.

China set ambitious solar power growth plans in 2016 as part of its five-year economic plan. The plan called for nearly doubling its solar output each year through 2020.

Now, China is committing another $360 billion to solar energy by 2020.

Trending: The One China Solar Stock to Own Right Now

China's annual electricity use per year is almost 5.9 trillion kWh, half again as much as the 3.9 trillion kWh the United States uses. That's a massive amount of energy demand in China alone. And nearly 59% of China's total energy output comes from coal, while solar energy accounts for only 5%.

That means as solar output catches up to coal, its growth potential is incredible.

Wood Mackenzie projects that China's solar power production will skyrocket by more than 700% by 2035.

Now that solar power is catching on across the globe, right now is the best time to invest in solar stocks to tap into its massive profit potential. And we have the best solar stock to buy right now...