So you've been watching the rising prices of cryptocurrencies over the past year or so and have decided it's time to jump in. 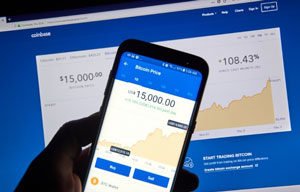 But you're not sure how to get started.

The best place to buy bitcoins for beginners is, without question, Coinbase. When it comes to ease of use, security, and convenience, Coinbase is hard to beat.

Today, I'll show you exactly how to buy bitcoins on Coinbase, step by step.

I consider Coinbase the easiest "on-ramp" into the world of cryptocurrencies – much as America Online was to the Internet back in the 1990s. (I believe Coinbase ultimately will be the first Bitcoin stock to have an IPO.)

For an overview of exchanges that offer a wider selection of cryptocurrencies and have more robust trading features, check out this article.

But Coinbase offers what beginners need most…

For these reasons, Coinbase has experienced dramatic growth over the past couple of years, from about 4 million customers in mid-2016 to more than 13 million by the end of 2017.

But such rapid expansion has caused growing pains.

When cryptocurrency prices are spiking or plunging, the site can get very slow or even crash. Customer service can be spotty, as the company has struggled to keep up with its exploding user base. Coinbase fees also tend to be a bit higher than on other Bitcoin exchanges.

The Cryptocurrency Everyone Else Will Regret Not Owning: To See Tom Gentile's No. 1 Crypto Pick and Excactly How to Trade It, Click Here Now.

That said, I've had a Coinbase account since 2013 and personally have not had any issues buying, selling, or transferring Bitcoin or U.S. dollars in and out of the account. And none of those issues change the fact that Coinbase is the best place to buy Bitcoin if you're new to cryptocurrencies.

Now here's your step-by-step guide on how to open, set up, and start using a Coinbase account…

How to Buy Bitcoins on Coinbase

this is vary interesting

Does the GDAX account allow me to trade in other cryptos aside from the 4 that Coinbase can hold? e.g. can I use US dollars or bitcoin to buy Ripple or others etc through the GDAX?

Thanks for reading Money Morning. At this time, GDAX only trades the same four cryptocurrencies available on Coinbase. GDAX may add more in the future, but I don;t expect it will ever have the dozens available on some of the other exchanges.

Coin Base will not accept customers from New Zealand.
Pity.

New Zealanders are lucky…Canadians are allowed to buy Bitcoin through Coinbase but then cannot sell, and are given no indication on buying that sale in the future is not possible. Its a scam and they should be prosecuted.

so what we canadians do to sell the bitcoin if we buy thru coinbase, it will be worthless, tnx

Everything looks familiar on your Coinbase article for buying. However, could you cover selling or transferring funds to buy other coins? We are very confused about all of that.

keep in mind your deposits can take up to 5-7 business day, so your not ready to use.

Is this for real?

Can I open a coinbase account from the Philippines using my mastercard or my local USD account?

ant one know how to register/access coinbase with a landline?

hi if a canadian resident is allowed to buy Bitcoin but not allowed to sell, what is the use of buying when canadian cannot sell? is there any explanation why canadians cannot sell, thanks

I have used Coinbase for about 7 months now. Yes, customer service is very sketchy and can be frustrating but the article is essentially correct. There doesn't appear to be any scam involvement though you can get a bit nervous awaiting verification of processes when the action is heavy. I bought initially with a cc for safety. I then transferred the BTC I purchased with cc at Coinbase to another exchange (Bittrex) where I was able to trade for other coins that CB doesn’t offer. I then took the BTC from the Bittrex acct back to Coinbase, sold the BTC and put USD valuation of BTC sold into USD wallet at coinbase. I then transferred the $ funds successfully in a matter of couple days to a newly established bank acct for trading purposes.

I'm having a major problem with Coinbase. My account is suspended because I was scammed by using a phone number I got for Coinbase from Google. They have reopened my account but I can't buy or sell thru Coinbase. Please help! I can't seem to get to get anybody to talk to me to advise me on what steps I need to take to be able to use my account.It's open, but what good is it if I can't use it? I am a subscriber so my info is available to you, please give me a call and get the rest of the story so that I can stop losing money by not being able to trade,Please!!!!!