The opinions from the mainstream press on geopolitical issues are mostly useless, designed to create fear for the sole purpose of a ratings boost.

A talking head on TV will tell you to sell all your stocks before a land war with Russia, or that the U.S. dollar is about to collapse into dust. 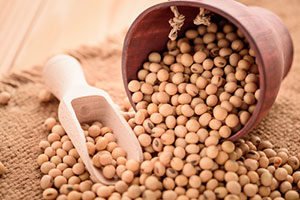 Here's the latest nonsense being spewed: Trade wars with China over soybeans will destroy American farms in the heartland.

"China Strikes at Trump's Rural Heartland with Tariff on Soybeans," said one sensational headline on an April 4 Bloomberg report.

Today, I'm going to explain why all the hype over the soybean tariff is exaggerated.

And instead of telling you to panic, I'll show you exactly how to turn the trade war freak-out into a long-term profit play...

China announced on April 4 that it could slap U.S. exporters with 25% tariffs on a slew of agricultural products.

This laundry list includes corn, pork, and sorghum. This is a real problem, as 20% of all trade between the United States and China centers on agricultural trade.

But the real "threat" - as the media claims - is to U.S. soybean farmers.

In 2017, farmers exported $13.9 billion worth of soybeans to China, according to Farm Policy News. That's more than half of all U.S. soybeans imported every year.

Soybeans are critical ingredients to creating the meal for the booming livestock industry that has thrived in Asia. Between 1961 and 2000, the production of livestock products in Asian and Pacific region has increased almost sixfold, according to the Food & Agriculture Organization of the United Nations.

Look, I can understand why the mainstream media is pushing the fear sentiment.

Losing such a big importer like China could hurt hard-working American farmers, which is an easy way to get eyeballs on newspapers and TV shows.

Getting your attention brings in millions in ad revenue.

But they're missing the actual math behind the threat, and that's creating a new opportunity for well-informed investors...

And I've worked with some of the top negotiators and political risk experts in the world.

You see, the problem with the so-called "trade war" is that 95% of this story is pure noise...

China is going to import more than 100 million metric tons of soybeans next year, and the simple reality is it can't do it without the United States.

China naturally says it's less, but most American agricultural economists will put that figure above 30 million metric tons.

Despite all of China's bluster, the dirty little secret is that China needs to purchase American soybeans.

And it isn't the only importer of soybeans, so it doesn't have nearly as much leverage as the media claims.

Argentina, the third-largest soybean producer in the world, is facing one of its worst droughts in 100 years. The country - desperate for supply for its own soybean-crushing industry - just made its largest purchase of American beans in 20 years on April 10.

That's right: The third-largest soybean producer is importing soybeans from the United States. China simply isn't the only destination for American soybeans.

Whether it likes it or not, China needs to rely on America.

The reality is, China can't afford to follow through on its threats, no matter what the media wants you to believe. Investors who can cut through the noise can find a juicy, 16% potential profit opportunity in the soybean market waiting for them.

And with the Dow Jones down 0.03% so far in 2018 and stock prices subject to wild price swings, this profit opportunity is nothing to ignore...

The Best Way to Profit from the Soybean Trade War