Legal marijuana revenue is expected to soar 145% by 2021, jumping from $10 billion last year to $24.5 billion. Investors who act quickly can still get in early on this industry's stunning growth potential with our top three marijuana stocks to buy today.

The $10 billion that the legal cannabis industry generated in 2017 is just the tip of the iceberg. 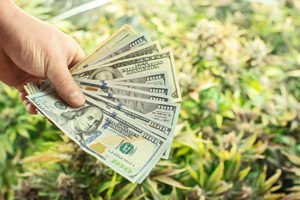 When it comes to this industry, it's essential investors do their homework to find only the best marijuana stocks. Many pot stocks can be risky investments and undergo volatile price swings. Plus, some upstart companies deal directly with the production and distribution of marijuana, which subjects them to regulation risks.

But the top pot stocks we're bringing you today avoid many of these risks.

Each pot stock we'll show you trades on a major exchange, has a diversified revenue stream that protects it from the ups and downs of a new industry, and is going to be an essential player in the marijuana industry as it grows.

That's why we're giving you our picks for several top "backdoor" pot stocks to watch...

Scotts Miracle-Gro Co. (NYSE: SMG) has been on our list of top cannabis stocks to watch since 2016.

While you're first thought about Scotts Miracle-Gro might not be marijuana, this is one of several cannabis "pick-and-shovel" plays that Money Morning recommends. Like the enterprising businesses who sold shovels to miners during the gold rush, this company profits from the marijuana industry without being directly involved.

This 150-year-old company is known for brands such as Evergreen, Roundup, Ortho, and Miracle-Gro. It has more than 8,000 employees and billions in annual revenue. This alone makes it attractive, but CEO Jim Hagedorn wants more.

In 2015, Hagedorn decided to expand the company's reach into the booming legal-marijuana cultivation market. That year, SMG purchased two companies that specialize in fertilizer and soil for growing marijuana. The following year, it picked up a 75% stake in the hydroponics equipment company Gavita International.

Hydroponics allows a cultivator to grow plants without soil by using a water solvent that is treated with nutrient-rich solutions. This has become a popular method for growing marijuana, particularly where populations are dense.

Bloomberg reports that the hydroponics industry had generated approximately $250 million in annual revenue in 2016, and significant growth is expected in the future.

The company has continued to acquire other brands related to cannabis cultivation and hydroponics. These include Botanicare, Vermicrop, Agrolux, Can-Filters, and General Hydroponics. In April 2018, SMG announced plans to acquire hydroponics supplier Sunlight Supply for $450 million.

SMG stock currently trades for $81.26 and pays a generous 2.54% dividend yield. But the stock price is going to grow even more.

Company CFO Randy Coleman indicates that company sales could increase about 15% in 2018. The high, 12-month price target for SMG stock is $113, which represents 38.72% gains for today's investor.

But the next company is adapting technology to the booming pot industry...

Microsoft Corp. (Nasdaq: MSFT) is an unlikely pot stock to buy, but one of the best plays you can make.

MSFT is a blue-chip tech giant currently running the world's second-largest cloud computing network with its Azure service. That cloud network is going to be essential to the legal cannabis industry.

Microsoft became an early tech player in the legal marijuana market through its cloud business with a lucrative partnership called Kind. Started in 2016, this is a software service that tracks cannabis from seed to sale.

Because the legal marijuana industry in most countries and U.S. states is so highly regulated, there must be tight controls in place that allow cultivators, dispensers, and regulators to track every cannabis plant, to ensure that players are 100% compliant with the laws. These controls also keep legal marijuana off of the black market.

As more states and countries pass laws to legitimize this industry, the need for these controls will continue to grow.

When you buy MSFT stock, you get the benefit of indirectly investing in legal marijuana, as well as the rest of Microsoft's lucrative business.

And our top pot stock to buy right now is one you might not have heard of, but it could be the most profitable to own of all...