With the price of Bitcoin down 63% from its December highs, signs the cryptocurrency will regain those highs have been few and far between.

But a new Bitcoin price prediction chart from Wall Street research firm Fundstrat suggests BTC will get back to those highs and beyond, reaching $36,000 by the end of 2019. 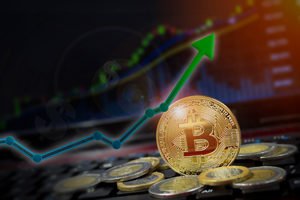 Fundstrat isn't shy about creating its own Bitcoin market indicators and has a reputation for bullish Bitcoin predictions.

The latest from Fundstrat is a chart based on the breakeven price for the Bitcoin miners. It's the point where the miners can make a profit after covering for their expenses, like mining rigs and electricity costs.

By plotting the chart all the way back to 2013, Fundstrat discovered a pattern that suggests a fivefold increase in the price of Bitcoin over the next 19 months may be too conservative...

The High End of This Bitcoin Price Prediction Is $64,000

This chart is based on the idea that multiples of the breakeven price for the Bitcoin miners create an approximate channel for the trading price of Bitcoin.

Take a look at just how accurate those price channels have proven to be, as well as what that means for the future price of Bitcoin... 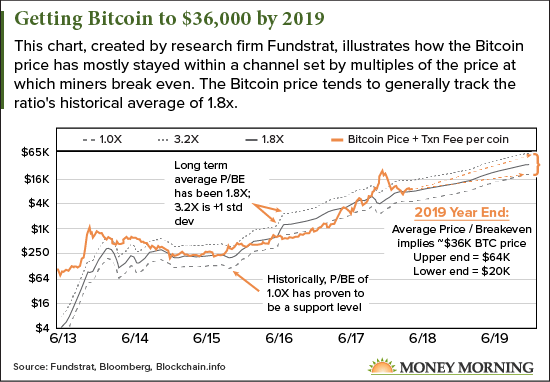 The lower bound of the channel is the point where the trading price of Bitcoin matches the breakeven price for the miners, seen on the chart as 1x.

The center of the channel is the historical average of this ratio, which has been 1.8x. In other words, Bitcoin historically has traded at 1.8 times the breakeven price for the miners.

Despite the steep drop in the Bitcoin price over the past five months, the price is still very near this middle line - just about where it should be. The chart suggests last fall's price spike was indeed a bubble bound for a much-needed correction.

The upper bound of the channel is 3.2x. Fundstrat Head of Research Sam Doctor based this on the standard deviation. For the most part, this line has served as an upper bound on the Bitcoin price.

Over the past five years, the chart's channels have been surprisingly on target - a good sign for  the forward projections, which reflect trends we're seeing in Bitcoin mining.

Doctor expects hash power - the measure of the computing muscle used in Bitcoin mining - to rise 350% by 2019. That will require heavy capital expenditures by the miners to keep up, raising the breakeven price as the chart predicts.

That's good news for the price of Bitcoin.

But as Bitcoin price predictions go, $64,000 is on the low side. Several Bitcoin price forecasts made over the past year have set the target much, much higher...

Long-Term Bitcoin Price Forecasts for $100,000 and Beyond