The arrival of the blockchain ETF this year gives investors a new - and less risky - option for investing in a technology expected to grow into a $3.1 trillion market. 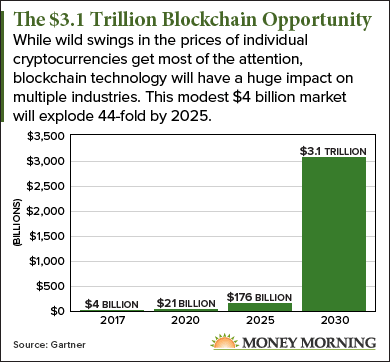 The reason behind this sudden wave of blockchain ETFs is simple. The research firm Gartner expects the value of blockchain technology to skyrocket 44-fold, from just $4 billion this year to $176 billion by 2025 - and an astounding $3.1 trillion just five years after that.

Just look at what's happened so far this year...

Bitcoin, the flagship cryptocurrency that sets the tone for the crypto markets, soared 900% in six months - from under $2,000 in July to nearly $20,000 in December.

Since then, Bitcoin has slumped badly. When the price of Bitcoin fell below $6,000 in February, it represented a decline of nearly 70% in less than two months. Today, the Bitcoin price is about $6,700 - still down about 66% from the December high.

But you don't want to choose a blockchain ETF at random. Here's what you need to know about each one of these investments - and the one we like best...

The next three funds are the most promising - including our top pick...

BLCN is a safe bet that could get better over time it if takes advantage of the brainpower in its advisory board - the one thing that really distinguishes this ETF.

You forgot BLOK ETF, which has more AUM than all the ones you show here combined.

Looks to good to be true, however I trust your judgement

Is BLOC anywhere related to BLKCF now BLKCD? I hope not as my experience with BLKCF which is now BLKCD was supposed to be a Blockchain future giant. Now it’s a sad memory in my investment portfolio.