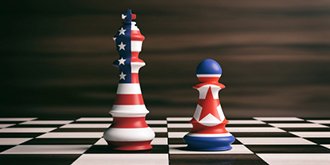 Billionaire Ray Dalio's hedge fund – Bridgewater Associates – has made a $22 billion bet against the market.