Despite one of the worst years in automotive history, Tesla Inc. (NASDAQ: TSLA) shocked everyone by surging 300% higher from its April lows. This brings its return from IPO up over 7,000%. It has even surpassed the market cap of Toyota Motor Corp. (NYSE: TM), one of the largest automotive manufacturers in the world. Now its stock split is attracting even more attention. 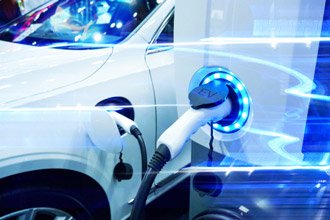 Tesla's meteoric rise and the emergence of all-electric competitors like Rivian, Nikola, and Lordstown Motors has investors clamoring to get in early on the next big thing. In fact, my colleague Tom Gentile believes this automotive upstart with a CEO who developed electric powertrains for UPS Inc. (NYSE: UPS) could be the next Tesla.

While electric car sales are still small, they are gaining traction. According to BloombergNEF, electric vehicles will account for 10% of global passenger sales by 2025, but that number could almost triple by 2030 to 28%.

But the best electric vehicle stock to buy right now is none of the above. In fact, this company doesn't even make cars.

I'm not here to tell you about all the electric car companies that could be the next big automotive manufacturer, I'm here to talk about one company that could help get every electric car from point A to point B.

And it's the biggest opportunity in EV stocks right now...

How This Company Can Power Every Electric Vehicle on the Road

That company is ABB Ltd. (NYSE: ABB), a Swiss-Swedish multinational corporation with robotics, power, electrical equipment, and automation technology divisions. While ABB is quite a large company at roughly a $57 billion market cap, what I want to focus on is its electric equipment division and specifically electric vehicle charging systems.

ABB is a dominant player in this space and offers an entire range of electric vehicle charging infrastructure from AC wall boxes and DC fast charging stations to on-demand electric bus charging systems.

As people shift to driving electric vehicles, they will need places to charge up, not just at home, but on the road. Everyone doesn't live in a house and with so many people parking on the streets charging stations need to be everywhere. This is why Grand View Research believes the electric vehicle charging infrastructure market is expected to reach $111.75 billion by 2027, up nearly tenfold from last year.

ABB has been gaining momentum in the automotive market and recently closed some potentially big deals. It announced a joint venture with Porsche developing a next generation electric vehicle chargers in Japan and scored a deal with GAC Toyota in China for AC wall boxes. While these are two recent deals, ABB has quietly been racking up deals in this space and should continue to grow along with the industry.

Electric vehicles make up only a fraction of the cars on the road, but with major automotive manufactures such as VW, Toyota, and GM getting in, these numbers should go up fast. Just think about the fact that there are over 150,000 gas stations across the United States. With the number of electric vehicles growing, people are going to need places to charge their vehicles, and that is where ABB is going to step in.

To find out how you can get the name of these 20 stocks, click here now...