The novel coronavirus hurt the 2020 IPO market for a few months. There was a 48% drop in IPO activity, a 67% decrease in IPO proceeds for April-March.

This led IPO investors to try other investment vehicles, like SPACs for a potential future price pop. 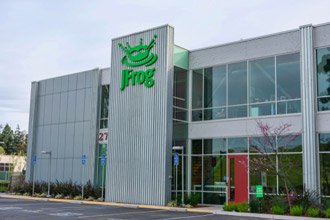 But tech IPOs are making a comeback this fall. And there are few more interesting than Israeli software company JFrog.

JFrog filed S-1 with the U.S. Securities & Exchange Commission on Aug. 24. A slew of other tech companies did the same.

These are all flashy names in the press. But there is reason to think JFrog stock is set apart...

Why JFrog Stock Is Exciting Investors

This company makes what is called "liquid software."

Its product enables continuous software updates in the background, versus occasionally having to initiate updates manually.

Often, businesses have been interrupted by the occasional update. Remember when websites would go down for a while, for maintenance? Consider how much business is lost in that time.

More importantly, cyber threats are becoming more common - and continuous as the world becomes more digital. This requires a continuous response, consistent updates to security that humans might not be able to keep up with manually.

Large companies like Alphabet Inc. (NASDAQ: GOOGL) and Microsoft Corp. (NASDAQ: MSFT) depend on JFrog to keep their updates going. Those that depend on security updates have entire reputations on the line.

Another use case would be a Tesla. You wouldn't want to have to restart your whole car for a software update. Ideally, that would happen in the background while it's running.

That is all to say that JFrog's software is in high demand as new technologies emerge. And it shows...

As far as profitability, JFrog has been cutting losses like butter.

Best Stocks: Three of the best stocks to consider buying today - these picks belong in every portfolio. Learn more...

Meanwhile, JFrog has had profitable quarters, and it could poke its head up permanently if things go well in the future. Chances are, they will...

JFrog serves over 5,800 organizations. Seventy-five percent of those are Fortune 100 companies. We mentioned Google and Microsoft already. But according to a JFrog prospectus, its clients include all the top 10 tech firms right now, as well as the eight of the top 10 financial services organizations.

That's good indication of future demand as JFrog seeks to expand its customer base.

Young companies like JFrog (founded in 2008) typically burn a lot of cash to start. It's rare to find a company with financials this promising, this early in the game.

According to TechCrunch, its margins have been 81% or better in every multi-quarter period on record.

What could stop you from investing in the JFrog IPO, or after it?

Should You Invest in the JFrog IPO?

The JFrog IPO is coming the week of September 14. The company will trade on the Nasdaq. And JFrog's ticker symbol is going to be FROG.

JFrog is hoping the IPO will raise $100 million, at a valuation of $3.3 billion. That would be an enormous cash boost for a company that has raised $227 million from investors over 12 years.

Before you go investing in IPOs like JFrog, it's important to watch for more financials and forward-looking statements as they are released.

JFrog might be an exciting unicorn. But there are a lot of unknowns to IPO investing. And you want to make an informed decision.

In fact, there are tech stocks out there with more public financials that have already been through the hype cycle.

With some public stocks, you might find the price more reliable, less inflated by the excitement around an IPO.

Three Stocks Even Better Than JFrog