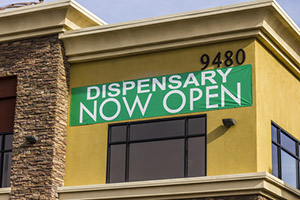 Real estate is the next big catalyst for marijuana stocks in 2017, as more voters demand legalized recreational and medical cannabis in their states.

Of course, Colorado has the most developed marijuana markets in the country.

That's a 33% premium for marijuana real estate landlords from the national average.

In Maine – where voters approved a measure to legalize recreational use on Nov. 8, 2016 – marijuana companies are paying three times the state average rent rates for industrial properties, according to the Portland Press Herald.

Marijuana companies in Oregon are also paying more for rent.

According to Bloomberg, marijuana companies in Oregon are paying $12 to $18 per square foot. In comparison, other businesses in the state pay an average of $5 per square foot to rent similarly sized spaces.

But why are landlords able to charge so much more to marijuana companies?

That means landlords can charge more for marijuana properties.

And with 28 states and Washington, D.C., having some form of marijuana legalization, the demand for marijuana real estate is only going to climb.

Special Report: Plot your course to a 7-figure weed windfall with the top pot stocks from every ecosystem – growers, edibles, dispensaries, and more.

That's why for 2017, we have three marijuana stocks in the real estate industry on our watch list.

Already, the first pot stock on our list has climbed 300% this year…

AmeriCann Inc. (OTCMKTS: ACAN) was founded in 2010 and is based in Colorado.

The company designs, builds, and owns state of the art cultivation and processing facilities for the production of medical cannabis. It also provides venture capital to developing cannabis businesses.

Currently, AmeriCann has over 1 million square feet of sustainable cannabis production infrastructure in development, according to its website.

In July 2014, the company purchased five acres of land in Denver to develop the Denver Medical Cannabis Center.

AmeriCann also owns 52 acres of land in Massachusetts. The marijuana real estate company plans to develop the property as the Massachusetts Medical Cannabis Center (MMCC). According to its website, AmeriCann believes MMCC will turn into the leading cannabis facility in the world.

Construction will start in March 2017, according to CBS.

According to its website, Grow Condos believes the most profitable opportunities in the marijuana industry will be in real estate, education, and advisory services.

In May 2016, the company also announced it was launching a new division called "Smoke on the Water."

Is there a list of marijuana stocks to watch in 2017?

Brilliant: Cannabis Is the Gold Rush of the 21st Century. 30 Stocks to Invest in Now.

Marijuana Stocks in 2017 to Watch No. 1: Innovative Industrial Properties Inc.

Innovative Industrial targets medical-use cannabis facilities for acquisition. As part of its strategy, the company acquires properties that are already operated by state-licensed growers.

Innovative then leases back these properties to medical marijuana companies for long-term, net lease agreements.

According to its website, lease agreements are generally 15 years or more.

On Dec. 19, 2016, Innovative Industrial Properties announced it closed a sale-leaseback transaction with PharmaCann LLC. The company acquired PharmaCann's 127,000-square-foot cultivation and processing facility in New York, according to Business Wire.