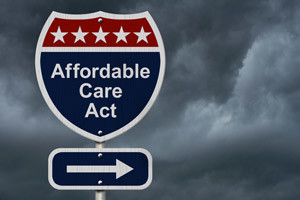 In Dow Jones news today, the markets were flat thanks to increased uncertainty over the fate of a new healthcare bill that would replace the Affordable Care Act (aka Obamacare).

The House declared that there would not be a vote on the bill during the final hour of trading.

The index pared gains and the S&P 500 stayed in the red after the Freedom Caucus said that there would not be enough votes in the House of Representatives to pass the new bill.

The healthcare debacle on Capitol Hill overshadowed a mixed day of economic data. New home sales hit a seven-month high in February, but weekly jobless claims rose more than expected. Healthcare stocks were among the largest losers during the session. Shares of Humana Inc. (NYSE: HUM) dropped 1.6%, while UnitedHealth Group Inc. (NYSE: UNH) dipped over 1%. Healthcare stocks were the biggest drag on the Dow and S&P 500.

The failure to pass the bill is a major problem for markets, as the Republicans focus on the healthcare and ignore income and corporate tax reform, financial and energy deregulation, and a major infrastructure bill. These three policies have been drivers of optimism in the markets in recent months and would likely have a far greater economic impact on domestic growth than the replacement and repeal of the healthcare law.

But the big story today is the "other vote" on Capitol Hill.

Almost by design, the healthcare battle overshadowed news that Republicans narrowly passed a vote to repeal a set of private regulations set in place under the Obama administration. The rules required Internet service providers to offer greater customer protection of user data and privacy.

It was a big win for firms like AT&T Inc. (NYSE: T), Comcast Corp. (Nasdaq: CMCSA), and Verizon Communications Inc. (NYSE: VZ), which lobbied strongly against the regulations.