If you think gold prices have peaked, think again. Gold may have fallen from its June 18 record high of $1258.30 an ounce, but the yellow metal is in for the long haul.

In fact, Credit Suisse Group AG (NYSE ADR: CS) has increased its long-range forecast for gold, arguing in a new report that prices should remain near current levels for at least the next four years.

CS analysts' 2014 target is now $1,300 and ounce, compared to their previous forecast of $1,120. That may not seem like a very brave forecast since gold is already trading at nearly $1,200 an ounce. But it has profound implications for gold miners, because mining stocks are priced based on expectations of future earnings. Removing the expectation that gold futures prices could slide way back removes an impediment to shares going higher.

The rationale for the change: Credit Suisse believes there is an 80% chance of a renewed quantitative easing - or money printing - due either to a full-blown sovereign debt crisis or a new recession. This enthusiastic and inflationary activity would rev up the safe haven buying that has pushed up gold prices over the past few years. The feeling is that companies and government officials may cheat and lie, but gold is as steady as a rock as an irrefutable, trusted source of value.

Additionally, the ultra-low interest rate policy of the world's central banks will keep gold prices on the move. Historically, gold prices tend to rise when short-term interest rates are below 2%. And this relationship has been particularly strong over the last few years.

With the U.S. Federal Reserve likely to keep rates on hold through 2012, and the potential for inflation-adjusted interest rates to move further into negative territory with another round of quantitative easing, there's little reason to think gold's run higher will end anytime soon. 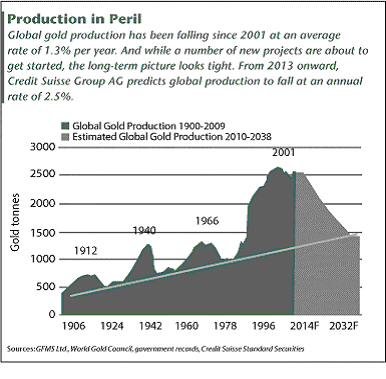 Complicating matters is the decline in new gold production. Since 2001, global gold production has fallen at an average rate of 1.3% per year. Increased demand and less supply means higher prices.
Credit Suisse research in 2003 and 2005 indicated that the decline was being caused by a reduction in exploration targets and exploration efficiency. In other words, it was becoming harder and more expensive to find new untapped sources of gold.

While a number of new projects are about to get started, the long-term picture looks tight. From 2013 onward, CS predicts global production will fall at an annual rate of 2.5%. Gold has always had allure based on its scarcity and it's about to get a heck of a lot scarcer.

As a result of the increased price outlook, CS analysts covering the gold mining sector upgraded their ratings of big players like Barrick Gold Corp. (NYSE: ABX) and Agnico Eagle Mines Ltd. (NYSE: AEM). Our position in the Market Vectors Gold Miners ETF (NYSE: GDX) gives us sector-wide exposure to this trend, and I will recommend that you add to the position once there is some weakness.

Credit Suisse say what masters want, yipe anyone believe tripe. To many connections with AIG, ZFS, and the likes, truth is someone wants currency and gold is euro – dominated by BIS the latter born of evil.

Where is this going, the fallout isnt over yet. Bets are on double D followed by D followed by D. Which cuts it first is anyone guess but prices will drop off the shelf.

Static or falling production is marginally supportive to the gold price, yes, but it's such a small factor, it's not really worth noting. Has more of a psychological impact than anything…mostly with the clueless crowd that thinks that higher prices will automatically spur increased investment in mines and higher production, which will eventually drive the price down.

The truth is that because most of the gold ever mined exists above ground, new mine supply is just a trickle added to a large pool. If the flow of that trickle were to double or be halved, it would still be a trickle and have a very modest influence. Markman should know this and include a mention, rather than imply that mine supply really matters.

Only the second time I've read one of your articles but I'm afraid (as with the previous one), you're wrong again Jon. Gold will rocket over the medium to long term, but short term it is gonna crash with the S&P, DJIA etc. Silver especially is trending in line with the S&P, but is weaker on the S&Ps recent dead beat rallies.

I'm going to add your articles to my list of very reliable indicators. If you disagree with what I plan to do, I'll be confident I'm on the right track.

Very suprised with Money Morning – they usually have great articles.

For God's sake, I just promissed to not waste my time with clowns, but I think we should initiate some kind of " John Markman's Award" for the so called " economists " who switch their opinnions more often then teir underware…
And of corse our first winner should be John Markman himself !…God bless him, because he is one of the best clowns in economic arena…(after Paul Krugman and NY Times' Friedman…)

Leave the personal attacks out of it. With nearly $14 trillion in debt, America's interest payments will shortly become insurmountable and funny money will flow like water. Gold and silver have to soar.

Lets face it. Papermoney will soon be like confetti
if the printingmachines worldwide continue at the
same speed.
The market has Aids.
Realestate- or stockmarket is not a solution.
The best way to preserve your savings and to
protect yourself against inflation is still gold and
good art.