Second quarter earnings season is in full swing on Wall Street and investors are keeping a close eye on corporate profits.

But rather than pinning their hopes on earnings for relief from the recent downturn in stocks, investors seem to be suffering from tunnel vision. They're ignoring numerous positive earnings reports and instead focusing on macro-economic trends to determine the day-to-day fate of the markets.

And as a slew of economic reports continue to display conflicting trends, investors are finding it difficult to read the tea leaves. So far this earnings season, the market and the investors that drive it are all over the place.

The result has been a string of volatile trading days featuring gyrating and erratic stock trading.

Then, the market turned around and rose 75 points, as analysts noted that Goldman's drop in revenue was similar to those reported by JPMorgan Chase & Co. (NYSE: JPM), Citigroup Inc. (NYSE: C) and Bank of America Corp. (NYSE: BAC).

Most concluded the firms' revenue fell not because of a weak economy, but because their customers decided to avoid the financial markets' turbulence during the spring.

Some analysts thought there were technical factors involved in the market's moves.  Investors may have been looking at charts that track the movements of indicators like the Standard & Poor's 500.

"Investors may have been anticipating the market heading back to early July lows so when it didn't fall apart in early trading, they slowly came back in," Michael Sheldon, chief market strategist at RDM Financial Group in Westport, CT. told the Associated Press.

On Wednesday, the Dow finished the day down more 100 points after rising by 100 points earlier in morning trade. The market swung wildly negative in the afternoon as Federal Reserve Chairman Ben Bernanke told lawmakers what Wall Street feared, that the economy has weakened.

Beat Factor Not Playing Out

Historically, during earnings season investors drive markets and individual stocks up and down based on the numbers contained in company's quarterly financial reports.

But this time, better than expected results have done nothing for investor enthusiasm.

The two numbers that impact the market most dramatically are the earnings beat rate and company guidance, according to Bespoke Investment Group (BIG).The percentage of companies that beat expectations versus the prior quarter is what counts the most.

Some 10% of S&P 500 companies reported earnings last week, and results were actually a good deal better than the market reaction would lead you to believe. Companies beat earnings per share estimates by nearly 11% on average. 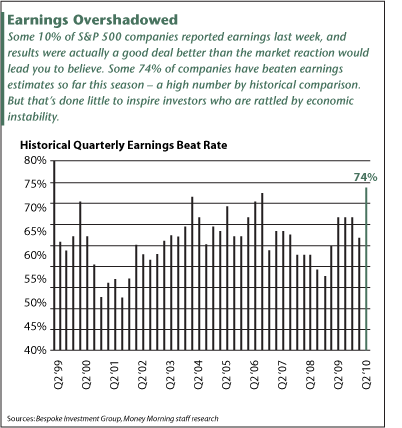 With the recent volatility, the commentary coming out of talking heads has been that investors are focusing on revenue rather than bottom-line earnings, perhaps because of the link between companies' sales and the economy.  If revenue is down because consumers aren't spending, that's a sign that the economy will remain weak.

But the "weak revenue" argument is misguided, as 73% of companies this earnings season have beaten revenue estimates, which is at the top end of the historical range and well above the long-term average of 62%, according to BIG.

Some analysts argue that revenue numbers in the technology sector have been especially bad.  But while revenue numbers came in weaker than expected for Texas Instruments Inc. (NYSE: TXN) and IBM, a total of thirteen tech companies have beaten revenue estimates this season, while only three have missed.
Of the 29 companies that released numbers as of July 21, 76% beat earnings estimates and 85% beat revenue estimates, BIG reported.

But the strong beat rate hasn't really translated, as the stocks of companies that reported have been sluggish.  Thirteen of the companies that reported last week saw their stock price increase on the day they reported, while 16 saw their stock prices decline.  The median one-day change in response to these earnings reports has been -0.50%, according to BIG.

Another reason investors may not be impressed with the way companies are outperforming estimates is the way analysts have manipulated their estimates.

Coming into earnings season, companies hadn't lowered guidance much in the off-season, yet analysts had cut estimates quite a bit, BIG noted, meaning companies should have an easier time beating estimates.

Most of the weak price action is coming from large caps and financials.

Companies outside of the S&P that beat estimates gained 0.57% on the day, confirming it's the big boys that are dragging things down.

Companies in the financial, healthcare, and technology sectors have been hit the hardest in reaction to their earnings reports.

The average financial stock has gone down 2.25% on its report day, with financials that beat earnings declining 0.59% on the day, and misses declining a whopping 8.21%. Technology stocks missing estimates have also gotten hit hard with an average one-day decline of 5.86%.

Consumer staples, energy, industrials, and materials so far have turned in the best earnings performances.

While the spate of mixed economic news worries investors, the reason for their cautious stance may not merely be a symptom of global economic woes.  Instead, some analysts are concerned that companies will need to increase capital investments to keep profits at levels that will keep investors satisfied.

If companies spend more as consumers pull back because of a weak economy, that spending could backfire, leaving companies with disappointing profits and investors quickly jumping ship.

As a result, most market analysts will be combing through upcoming earnings reports to determine if increased spending cut into profit margins.

"Prospects are growing for earnings pressure derived from shrinking margins," Morgan Stanley (NYSE: MS) analyst Rizwan Hussain warned clients in a recent report obtained by Bloomberg News. "Early earnings announcements have already hinted at this budding margin pressure, with companies indicating that cost-cutting days may now be in the past."

FedEx Corp. (NYSE: FDX), for example, announced it is investing in new long-haul freighters and other equipment while adding employees.

"This suggests to us that across the economy, the reinvestment that has been absent for the past two years is needed at this point to pursue revenue opportunities," Hussain said. "To continue boosting sales, companies will likely have to hire and spend."

Increased hiring and capital investment should be good news for the economy as a whole, as well as millions of unemployed Americans. But for investors, the rewards are anything but certain.

Absent any signs of inflation, companies may find it difficult to raise prices and pass the costs on to customers. And businesses, forced to buy commodities to feed their factories, could get caught in another squeeze as increasing consumption from China forces prices for raw materials higher.

Earnings Must Hit on All Cylinders to Move Stocks Forward

Investors had hoped earnings season would provide relief to the market by focusing attention on balance sheets instead of external events. But while Europe has quieted down, and the Chinese juggernaut stokes demand, the U.S. economy still presents major concerns.

Even though companies have reported positive results so far this reporting period, investors don't seem to be listening, having been quick to sell on even a whiff of bad news.

But the Fed is still expecting the economy to expand for the remainder of this year and next, albeit at a lower rate of growth.

That is cheap by historical standards. Normally, when interest rates and inflation are low, P/E ratios are higher than average. Considering inflation and interest rates are the lowest they've been in decades, stocks would seem undervalued.

But quarterly earnings are backward looking and yesterday's performers may not be tomorrow's heroes.

So, what are investors looking for? Clearly, the flow of negative economic news is keeping investors focused on the macro picture versus individual earnings reports.

While small stocks may have the wind at their backs, for big stocks to move forward, earnings need to beat, revenue needs to come in higher than expected, and the outlook must be positive. Any deviation from that will probably trigger another round of selling.

With Mid-Term Elections Looming, Will Democrats Fire Back with a Second Stimulus