I believe Apple stock (Nasdaq: AAPL) is going to be world's first trillion-dollar company yet I want to short the snot out of it.

Perhaps it is all three considering that Apple has risen more than 3,000% in the last ten years, turning almost any attempt to go against the grain into a "widow maker" trade.

I say almost because I am one of the lucky ones.

A few weeks ago I recommended my Strike Force subscribers purchase put options on Apple, effectively shorting the stock. That resulted in a 47% profit in less than 24 hours for anyone who followed along, excluding fees and commissions.

I'm not alone in my thinking.

Given that the stock had run up to nearly $608 a share before the announcement, presumably Kass had banked some gains, too.

I haven't spoken with Mr. Kass so I can't comment on his current thinking nor the specifics of his trade, but here are mine: 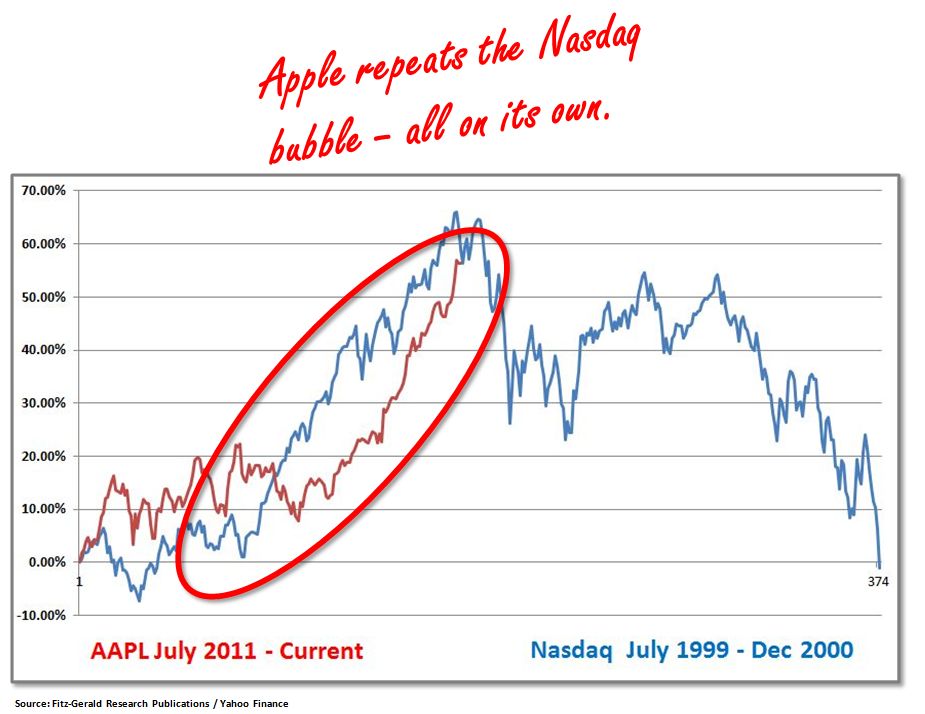 Add it all up and there is enough to make you go hmmm...

Of course, there is no doubt I will incur the wrath of Apple fans everywhere and arm chair traders from here to Tibet.

Get over it guys; please refrain from the snarky e-mails telling me I'm an idiot or out of touch or worse - I believe in Apple. I really do.

What I am suggesting is simply the logic behind Apple as a trading opportunity for nimble, aggressive and like minded market mavens.

Besides, if I am correct and Apple does trade lower in the weeks ahead, I'm going to be picking up shares as an investment.

I hope you will be buying too.

Seriously?
You took two graphs and tried to match them; not by any fundamentals.
Just because you got lucky shorting a stock with solid fundamentals, I wouldnt be bragging about it; I'd wager youve lost many times guessing.
Isnt this article old anyways? Why are you republishing it?
Why are you comparing Apple to Rim? Not even close to the same company. Ridiculous.
So Apples trailing earnings will be $40+ after next earnings release and you think its a good idea to suggest it will fall? So people will then short and lose?
Completely Ridiculous.
Yeah it may fall but your guessing on nothing but rhetoric.

It's very risky shorting a stock in a powerful uptrend that is breaking out to new highs in an uptrending market. Right now it's flagging and looks like it could go higher. Better to wait for a downtrend to start.

You have a misleading graph comparing AAPL to the bubble. The fact is, AAPL's trailing P/E is 17+, whereas firms like CSCO had it well into the hundreds. You call that a bubble.

Smart investors know that its risky to be first to the party. Better wait a bit and see which parties (stocks/sectors) are doing the best (most fun)- then join the party. Remember, Keith is a trader who by nature follows short term trends, which can and do change in real time. If you are a long term investor it might pay to keep this fundamental difference in mind when reading here.

Apple is a product stock. Meaning they tend to rise by releasing products. Wonder what might happen to apple after the iphone 5 and itv releases. What?s the next hit?

If you want a very low risk way to short Apple you should short S&P500 futures against going long DJIA futures. When Apple took off on its, most recent, rally the 6 month aggregate performance of the S&P500 crossed, at that very point, against the DJIA.

So, we know that the S&P and DJIA will always meet with one another at some point. By using this method of shorting Apple you're protecting getting it wrong as the two markets will converge at some point down the line.

I have been trading AAPL for a while now. I got alerted well before the volume started to pick up and because of this I was able to score a nice profit a few times. The report helped me understand the complete scenario and the pros and cons. It’s always best to buy before everyone else does. Check it out at vippennystocksite.com (Kindly, copy and paste the link in to your browser.)