Where did the love for the shiny metal go?

Now the gold bugs are crying, and the "I told you so crowd" is warming up in the wings.

Let's start with gold prices themselves. Right now they're down three months in a row and many gold investors fear there's no bottom in sight.

What they don't realize is that the fall in gold prices is as rare as proverbial hen's teeth. This is the first time we've seen gold prices tumble three months in a row since March of 2001.

In fact, since 1957 we've only seen gold prices fall three months in a row 65 times out of a total of 661 three-month periods, according to data compiled by Bloomberg and Standard and Poor's.

But here's the thing about gold prices…

Would that be a bad thing? In the bigger scheme of things, not really.

People forget that gold prices fell by more than half from 1975 to 1976, and were down 17 out of 24 months. At the same time, gold prices also recorded 10 three-month declines during the period.

The point is, bear tracks always precede bull market runs. So I am not especially concerned by this pullback in gold.

In fact, as you can see from an earlier forecast, we're right on target with my expectations for gold this year. 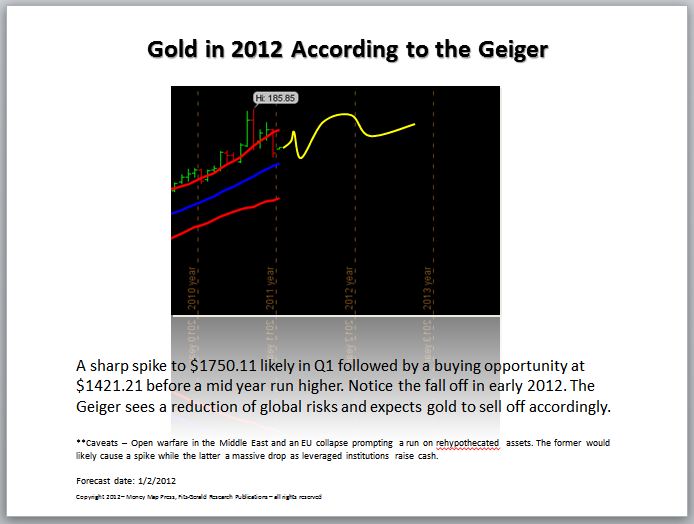 The drop in prices we're seeing is simply a matter of traders adjusting their risk tolerance by taking money off the table. They are moving out of gold and into dollars.

Gold Prices Are Driven by the "Smart Money"

Not surprisingly, Greece is the biggest single factor behind the move. Traders are concerned that the nation will summarily go its own way, shatter the EU's bailout and potentially sink the euro itself.

Next week the worries may be something entirely different. You just never know how these events are going to unfold in the short term. I sure don't.

I believe gold prices will fall further. Traders still haven't totally priced in the costs of an EU flameout, nor have they begun to liquidate positions to raise the necessary capital to meet redemption requests you just know are waiting in the wings.

Don't forget that gold is now a marginable asset. It is also one of the most liquid assets on the planet if you factor in derivatives like futures and options – many of which form the basis for sophisticated stock trading models because they indirectly dictate the amount of risk a trader can or cannot take.

In other words, gold is driven by "smart money" – meaning those with the scope and scale to move markets — even if it's not all that smart.

As Western currencies decline and emerging economies continue to "buy" value outside the U.S. dollar, international demand for physical gold is more likely to increase than decrease.

China is the most aggressive of these foreign buyers, accumulating an average of 45 more tons per month over the last eight months than the prior eight, according to Eric Sprott, CEO of Sprott Asset Management.

You can guess what kind of effect this is going to have on gold prices as easily as I can.

Other nations have a more indirect impact. Iran, for example, is planning to sell oil to China for gold as U.S. sanctions take effect. Brazil and Russia are both hinting at a move towards some sort of physically-backed currency basket in lieu of the dollar as an international backbone. And India recently retracted a gold tax that paves the way for broader gold ownership.

Just as it is with other forms of investments, capital is shifting from the nanny states of the West to the growth-backed economies of the Far East.

The sovereign debt crisis still burning in Europe will only accelerate this process, especially as major financial hubs transition trading activity to emerging and newly regulated exchanges like Shanghai.

Then there's France and newly elected President Francois Hollande, whose tax-and-spend policies are perhaps the biggest single potential influence on gold prices on the planet at the moment.

The EU is going up in flames and Hollande wants absolutely nothing to do with austerity. In fact, he's likely to abandon it entirely. That speaks to more stimulus and more bailouts.

European central bankers suggest this is necessary to drive growth. But last time I looked this was political speak for "imprimer de l'argent," or printing money.

And printing money by its very definition is inflationary.

Don't Lose Your Love for Gold

That means institutions and individuals alike are going to be looking for hard assets as a means of preserving their wealth. Once the headlines die down they will again turn to gold.

I get that question all the time and my answer remains the same. It depends on your expectations and your time frame:

At the end of the day, there's no rocket science to this.

The gold industry produces just 2,500-2,800 tons a year, depending on various data sources. Eric Sprott notes that if you take China and Russia out of the picture by removing the 500 or so tons they produce, it leaves approximately 2,200 tons for the rest of the market.

Imagine what happens when somebody wants an extra 500 tons. It's highly unlikely they'll be able to buy it without moving prices…higher.

[Editor's Note: Keith's Geiger Index continues to deliver for his subscribers. The track record on this one is amazing. Since inception, 64 of his 67 recommendations have been winners.

And looking at the big picture here, things are just getting started…

Once you see Keith's "secret weapon," you'll understand why. To learn more about the Geiger Index click here.]

24068 Reads
Sell These 3 REITs Before It's Too Late
We love REITs, but they aren't created equal. These three REITs shouldn't be anywhere near your portfolio.