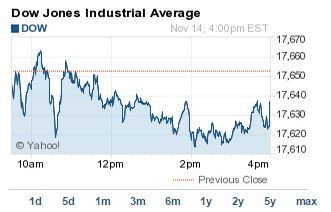 The DJIA today retreated from Thursday's record high, despite strong economic data from the European bloc and the strongest consumer sentiment report in more than seven years. Health stocks dragged down the index in renewed concerns about earnings outlooks.

What Moved the Markets Today: U.S. consumer confidence hit its highest level since 2007, fueled by falling energy prices and general optimism about the economy. And economic data in the European Union painted a far better picture of the world's largest economic bloc than expected. France reported quarterly GDP growth of 0.3% this morning, besting expectations of 0.2%. Germany narrowly missed falling into a recession by reporting 0.1% growth for the quarter.