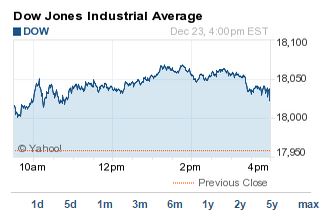 The Dow Jones today struck an all-time high, surpassing the 18,000 mark for the first time and marking the fastest 1,000-point gain in history. The news is hardly surprising. Money Morning's Shah Gilani predicted in November that the Dow would hit 18,000 by the end of the year.

What Moved the Markets Today: The Dow added 64 points Tuesday, fueled by a strong GDP report from the U.S. Department of Commerce. This morning, in a third revision to third-quarter GDP, the agency said the U.S. economy grew at a pace of 5%, its strongest level in more than a decade. This easily surpassed consensus estimates of 4.3%. Despite optimism about future economic growth, biotech stocks were the hardest hit on the day, with the Nasdaq Biotech Index slipping 4.5%, its worst one-day session since April.