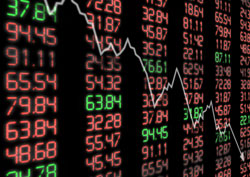 This morning, pre-market quotes indicate that investors are keeping a close eye on falling crude prices and an important JOLTS report that can offer additional perspective on the fragile U.S. jobs market.

Here are some of today's pre-market movers and what you should know about the stock market today - including your "Money Morning Tip of the Day" - to make it a profitable Tuesday:

There are six "Unstoppable Trends" backed by trillions of dollars - and investing in companies that tap into these trends will pay off huge.

Energy: Analysts almost universally hate the energy sector. But it's showing every sign of approaching the point of "maximum pessimism" - and that should quicken your pulse as an investor. Demand for oil is accelerating, and oil prices are set to rebound even as supply steadily increases.

Demographics: For the first time in history, the number of people aged 65 and older will outnumber children younger than five years old worldwide by 2020. This will mean surging profits for medical companies like Becton, Dickinson & Co. (NYSE: BDX).

Medicine: Healthcare spending in the United States jumped 3.6% in 2014. This was due in large part to Obamacare's implementation and a related surge in Medicaid expenditures. New politically driven "mandates" will create guaranteed market shares for favored companies.

War, Terrorism, and Ugliness: The U.S. Department of Defense has requested a budget for fiscal year 2016 that increases spending by 7.7% to $585 billion. The defense sector will benefit greatly as governments gear up to defend against new and emerging threats. Defense companies like Raytheon Co. (NYSE: RTN) will flourish.

For the last two trends, plus more info on the massive wealth all six will create, go here: These Unstoppable Trends Are Creating Ever-Stronger Profit Opportunities