The Nasdaq pre-market showed further signs of trouble, with Nasdaq futures plunging 46 points. This was the day after the Nasdaq Composite fell 118 points – its steepest one-day decline in almost a year. 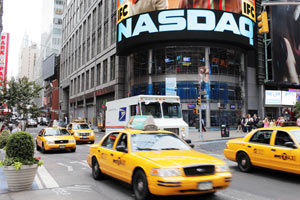 A wide sell-off in the biotech and technology sectors outpaced gains fueled by news of a merger between Kraft Foods Group Inc. (Nasdaq: KRFT) and H.J. Heinz Co.

This morning, U.S. weekly jobless claims are expected to hit 291,000, as Wall Street is keeping an eye on the conditions of the employment markets after last week's Fed announcement on interest rates. Investors will also be watching the biotech sector and small cap stocks to see if there is any improvement from yesterday's sell-off.

Continued weakness in Europe also remains a central concern to investors, who will want to pay attention to a revise fourth-quarter update to French GDP. The nation hopes for an improvement from its very weak initial reports. In addition, keep an eye on a retail sales report from the United Kingdom, where the country has shown modest year-over-year improvement in its economy.

Here are some of today's pre-market movers in the stock market today, as well as your "Money Morning Tip of the Day…"

Money Morning Tip of the Day: The Facebook stock rise is far from over.

In the past year, Facebook stock has gained 30%. That's more than three times the 9% gain of the Dow Jones in the same period.

But the Facebook stock price will head even higher.

The consensus forecast among 57 analysts covering FB stock is widely bullish, according to a recent Thomson Reuters poll.

The Wall Street Journal shows 40 analysts currently rate Facebook "Buy." That's up from 38 a month ago. Five maintain an "Overweight." Six have a "Hold." Just one rates FB a "Sell."

The 43 analysts providing Thomson Reuters with a 12-month price target have a median target of $91. The high estimate is $107; the low estimate is $65.

Money Morning Tech Specialist Michael A. Robinson was ahead of Wall Street when he predicted on Feb. 27 that Facebook stock will double to $161.36 in three years.

Robinson pointed to Facebook's indisputable role as the world leader in the $9 billion social networking market, which grew by 36% a year between 2009 and 2014.

He also cited how the firm has matured into a "mobile juggernaut," rapidly increasing its mobile active users (745 million in Q4 2014) and deftly turning the mobile trend into money. Mobile ad sales in the quarter represented roughly 69% of total ad revenue, a 30% annual gain.

Facebook's new initiatives and strategic acquisitions are yet another tailwind for its stock price.

"Facebook still offers investors plenty of upside," said Robinson. "Even better, it's a big-cap firm, so it should remain less volatile than the overall market. That makes Facebook a great long-term tech play that can really improve the value of your portfolio."