The DJIA today soared 263 points, bringing 18,000 back into the Dow's line of sight again. The cause for the surge? Several key deals in the healthcare sector plus big gains for energy stocks. 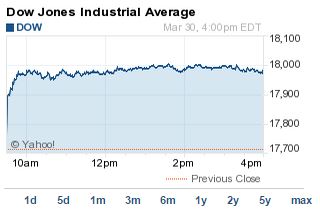 What Moved the Stock Market Today: The S&P 500 energy sector jumped more than 1.8% on the day despite declining oil prices. Today's most active energy stocks were Exxon Mobil Corp. (NYSE: XOM), up 2.45%; Chevron Corp. (NYSE: CVX), up 2.51%; and Kinder Morgan Inc. (NYSE: KMI), up 1.94%. Oil prices were under pressure today as rumors of a possible deal between the United States and Iran have emerged.

Money Morning Tip of the Day: Finding quality long-term stocks and holding them for years is one of the best ways to grow your wealth. Solid long-term stocks are an essential part of a well-balanced portfolio. They let you collect gains steadily for five, 10, or 20 years while you focus on finding other investments and opportunities.You can check in with them every quarter and see if anything has changed or adjust your holdings if your investment priorities are different. But for the most part, they are low maintenance, low risk, and high reward.One of the best long-term stocks to buy on the market today is Alibaba Group Holding Ltd. (NYSE: BABA).BABA has dipped nearly 20% in 2015. Wall Street panicked after Alibaba's last earnings report because it missed analyst expectations of $4.45 billion in revenue. But Alibaba's reported revenue of $4.2 billion represented a yearly increase of 40%.

The company's mobile base is growing, too. It hit 265 million monthly active users last quarter. That's a yearly increase of 95% and a quarterly increase of 22%.

BABA is such a good long-term buy, especially at its current price, that Money Morning Executive Editor Bill Patalon suggests adding to your position every time the stock comes down.

"Alibaba is a stock that you have to be willing to hold for a long time," Patalon said. "You don't just load up the truck with Alibaba stock and pray. You buy in and add to your position when there are pullbacks. This is a stock you want to hold for 10 to 15 years."

To get two more quality stocks to pick up now and hold for the long haul, check out: Best Long-Term Stocks to Buy Now