A controversial Indiana law has big-name companies taking action against the state...

The Religious Freedom Restoration Act, signed into law by Indiana governor Mike Pence on March 26, allows individuals and corporations in the state to use religion as a defense if they are sued.

Its import is more far-reaching than that, however. Businesses could use the Indiana law to legally turn away gay, lesbian, and transgender people. Religious and ethnic minorities are vulnerable as well. (Note that on April 2, the under-pressure Governor Pence issued a "fix" that is really not a fix. It provides that Indiana's RFRA can't override local anti-gay discrimination laws - however, most counties in the state have no such laws to speak of.)

The new Indiana law sparked a trend. On March 27, the Arkansas Senate overwhelmingly approved a nearly identical religious freedom bill that would also allow businesses to refuse service to whomever they please based on religion.

Business leaders across the nation have begun to speak out against the Indiana law, including Apple Inc. CEO Tim Cook, Wal-Mart CEO Doug McMillon, Nike CEO Mark Parker, and more. Aside from moral objections, they argue it will make it harder to attract employees and customers in the state.

Here's a list of the companies (it grows daily) that have spoken out - or even taken action - against the Indiana law...

On March 27, CEO Tim Cook, who came out in October 2014, tweeted his opposition to the Indiana law. He urged Arkansas Governor Asa Hutchinson to veto his state's bill. 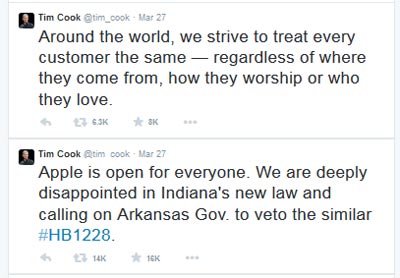 When the Indiana law passed, CEO Marc Benioff immediately withdrew his multibillion dollar company's events from the state. He pledged a "slow-rolling of economic sanctions" in an interview with Re/Code. 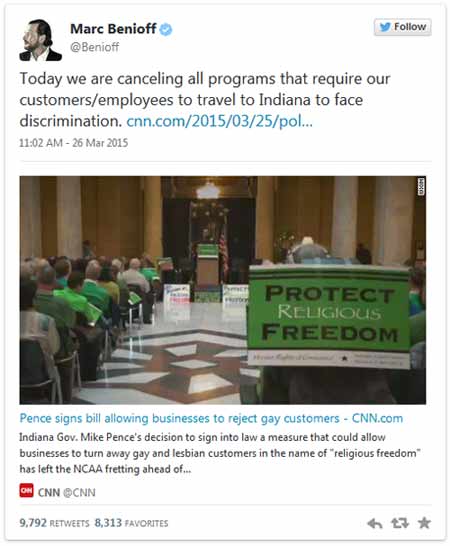 Benioff was one of the first major CEOs to voice his opposition, and spent weeks urging the Indiana government not to pass the law.

"Today's passage of HB1228 threatens to undermine the spirit of inclusion present throughout the state of Arkansas and does not reflect the values we proudly uphold," McMillon said in a statement on March 24. "We feel this legislation is also counter to our core basic belief of respect for the individual and sends the wrong message about Arkansas, as well as the diverse environment which exists in the state."

The Indianapolis-based business-reviewing website has halted plans for expansion in the state.

"We are putting the 'Ford Building Project' on hold until we fully understand the implications of the freedom restoration act on our employees, both current and future," CEO Bill Oesterle said in a statement. "Angie's List is open to all and discriminates against none and we are hugely disappointed in what this bill represents."

CEO Mark Parker released a statement to the Human Rights Campaign on March 24 stating his opposition.

"Nike proudly stands for inclusion for all. We believe laws should treat people equally and prevent discrimination. Nike has led efforts alongside other businesses to defeat discriminatory laws in Oregon and opposes the new law in Indiana which is bad for our employees, bad for our consumers, bad for business and bad for society as a whole. We hope Indiana will quickly resolve this."

Together with Nos. 7-10 below, Microsoft signed a letter of opposition drafted by the Human Rights Campaign that reads:

"These state laws set a dangerous precedent that stifles investment and economic growth by jeopardizing a state's status as a welcoming place for employees to live and thrive." 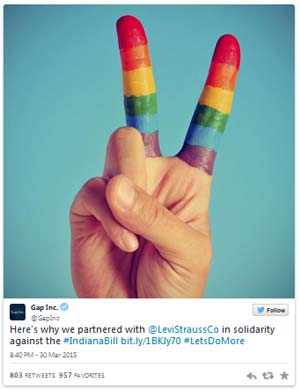 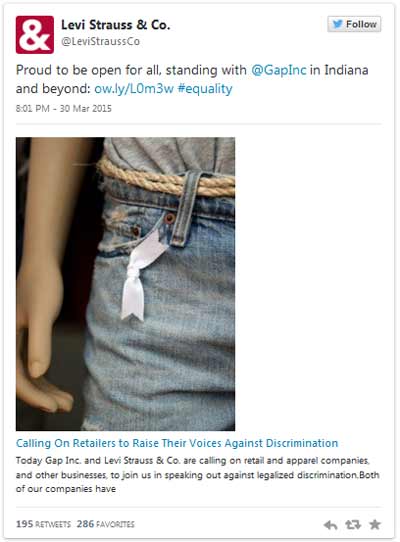 The Indiana law brought together two apparel competitors, Gap and Levi Strauss, in a joint statement of condemnation.

"Discriminatory laws are unquestionably bad for business, but more importantly, they are fundamentally wrong," the companies wrote in a joint blog post. "At Gap Inc. and Levi Strauss & Co., we are proud to say we are open to business for everyone."

LLY employs nearly 11,000 people in the state of Indiana. They called the Religious Freedom Reformation Act "bad for Indiana and for business."

"One of our long-held values is respect for people, and that value factors strongly into our position," spokeswoman Janice Chavers stated. "We want all our current and future employees to feel welcome where they live."

In a March 30 CNBC interview, cofounder Max Levchin said he would "encourage PayPal's new CEO and other CEOs in Silicon Valley to evaluate their relationship with the state of Indiana. If local bills and laws say that it is OK to discriminate, you have to make sure that you are protecting your employees and you keep them safe and comfortable."

The same day he tweeted:

Twitter used its own platform to voice its opposition on March 30.

"It is unconscionable to imagine that Yelp would create, maintain, or expand a significant business presence in any state that encouraged discrimination by businesses against our employees, or consumers at large," CEO Jeremy Stoppelman stated March 26. "We're looking at you, Arkansas."

Subaru has a factory in Lafayette, Indiana. It issued a statement to Green Car Reports editor John Voelcker on March 30, which he shared on Facebook: 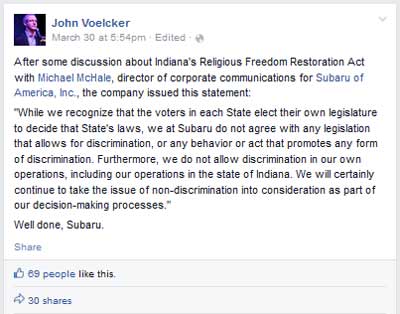 The mobile payment company released a statement against the Indiana law on its website. It reads, in part:

"A new Indiana law allows businesses to discriminate against customers, particularly based on traits like sexual orientation. We believe this is wrong, contrary to our core values, and inconsistent with the ideas of fairness and access on which the American marketplace was built. There is no place in business for laws or practices which deny people access to goods and services based on who they are, what they look like, where they're from, or whom they love." 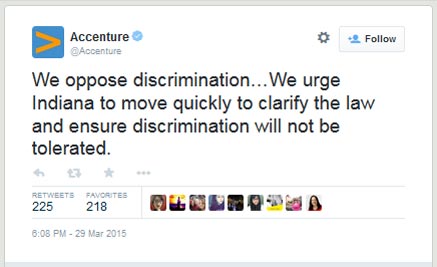 Anthem is the largest for-profit healthcare company in the Blue Cross and Blue Shield Association, and is headquartered in Indianapolis. Its CEO signed a letter of opposition to the Indiana law. Eli Lilly, Angie's List, Salesforce, and Nos. 20-24 below also signed.

"We are deeply concerned about the impact it is having on our employees and on the reputation of our state," the letter reads. "All of our companies seek to promote fair, diverse, and inclusive workplaces. Our employees must not feel unwelcome in the place where they work and live."

We've already mentioned some of the signors - Yelp, Salesforce, Square, Twitter, Microsoft, and PayPal. Nos. 26-72 reflect the rest. Note that this list grows by the day.

At least this article gives a list of companies & corporations to boycott. (Never liked Apple anyway)

Every business, especially an intrastate business, should be allowed to refuse service as their conscience dictates whether you believe their reasons are bigoted or ignorant is not an issue but liberty is, especially religious liberty. Muslim businesses refuse to cater gay weddings without consequence beyond the loss of patrons, but every-time a Christian owned business makes the same decision they are dragged into court. Indiana's law only provides a legal defense for business owners who are sued by disgruntled patrons; it does not overturn or alter laws regarding discriminatory employment or discrimination in the workplace.

"No Shoes, NO Shirt, No Service" is not just a slogan. Some upper end restaurants enforce dress codes to gain admission but none of them are being sued by homosexuals or anyone else for that matter.

Where's the tolerance from the Left? No one ever HAS or would've BEEN discriminated against. That's not that the law is about. This about the LGBT community being bullies and forgetting their own roots.

Where is ALL THE OUTRAGE over Foreign Governments Hillary Clinton takes Millions of Dollars from that share no respect for WOMEN OR the LGBT Community.?

Such a bogus sham! EQUAL OUTRAGE FOR ALL, I say!

This is literally one of the dumbest articles that I have ever read. The author obviously did no research, which should make readers question why they should trust anything else published in these columns. About twenty other states have enacted such laws, which simply preclude forcing bakers, photographers, and caterers (who are devout Christians) from having to provide services at "gay weddings."

As for companies who oppose the law, who cares about such hypocrites — who do business in countries where homosexuals are stoned to death. Columnist George Will points out that Apple’s openly gay CEO, Tim Cook, “thinks Indiana is a terrible place. (But) He opened marketing and retail operations in Saudi Arabia two months before a man was sentenced to 450 lashes for being gay.” World Magazine reports that Cook has recently been in the United Arab Emirates negotiating on behalf of Apple, where homosexuality is against the law and the penalty is death.

Why don't you go oppose the mindless hypocrites, like Tim Cook, rather then people of conscience who truly do live their lives according to their faith?

Majority of American citizens SUPPORT RFRA, gay mafia are attempting to intimidate corporations into boycott. This effort to demoralize majority will not stand. All show and no go, Law will stay and grow to include MORE states.

Are we subscribers now considered to be a captive audience to be subjected to political commentary? There is plenty of free editorializing wherever you look in the public arena. My paid subscription is not where I expected to encounter the same drivel I can hardly avoid elsewhere at no charge. I suppose the writer felt justified in adding the political commentary because no doubt a tremendous effort was required to assemble the list of 72 companies/organizations that opposed the RFRA law in Indiana, and felt especially justified because of the extra effort required to incorporate into the piece so many of the social-media postings by those companies, each of which is also political commentary that I may see elsewhere at no charge if I want it.