For April 27, 2015, here's how the stock market did today, earnings reports, the top stock market news, and stocks to watch based on today's market moves... 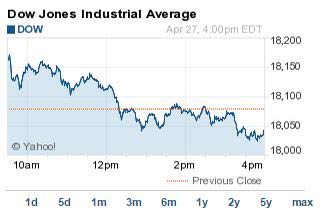 The DJIA Index fell 42 points today, while the biotech sector dragged down the Nasdaq. The S&P 500 Volatility Index (VIX), the market's fear gauge, jumped 8.62% on the day.