The Apple stock history reflects the remarkable journey this tech giant has had.

Apple Inc. (Nasdaq: AAPL) has one of the most compelling stories in Silicon Valley. Its return from near-death in the late 1990s under the leadership of tech icon Steve Jobs is the stuff of legend.

That was enough capital to fulfill the company's first order for 50 Apple I computers at $500 each.

Since then, the company has gone from a market leader to irrelevance to the dominant tech titan it is today. And AAPL shareholders have been along for the ride.

Through its resurgence, Apple has become much, much bigger than it ever was in the 1980s. It pulls in almost unthinkable profits, earning more net income in a quarter than most companies make in revenue.

The introduction of the iPhone was the turning point. In the decade following the iPhone's debut, Apple stock soared 724%.

And the deeper you go into Apple stock history, the crazier the numbers get.

"Some Kind of Fruit Company" 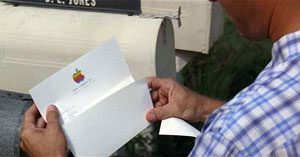 Consider the fate of a fictional investment made by the film character Forrest Gump and his business partner, Lt. Dan Taylor.

In the movie it's revealed that Lt. Dan had invested a portion of the profits from the Bubba Gump Shrimp Company in "some kind of fruit company."

Back in 2019 Cult of Mac took a stab at figuring out just how much the pair's stake in Apple would be worth. They had to make an assumption for the initial amount invested, which they pegged at $100,000.

And since the letter in the movie was dated 1975 – five years before the IPO – it's assumed that the sum was invested as venture capital.

Apple built its reputation with the Apple II line, but the Mac showed the way to the future. At the time, many ridiculed the use of a mouse and icons to control a computer. With Mac sales slow to ramp up, the Apple II provided the bulk of company profits for the balance of the decade.

Jobs' attempt to push out CEO John Sculley backfired when the Apple board backed Sculley. Stripped of any power and consigned to a remote office, Jobs officially resigned five months later.